Back to: Sonic Adventure 2.

In certain cutscenes, Big the Cat is viewable via pressing buttons at a certain time. For example, in the Dreamcast version of the game, In the cutscene after fighting Knuckles/Rouge, press

again and again to make Big appear and walk around.

Big also makes an appearance hidden in each stage. In fact, his appearances were so obscure that the development team for Sonic Adventure 2: Battle seems to have forgotten to port him, with many of his former spots being occupied by placeholder objects (Pointing to Rings) using his object ID.

These are various graphics that can be found inside the game's disc. 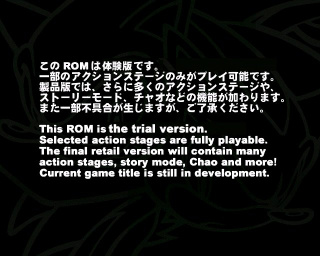 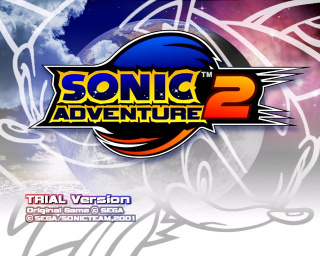 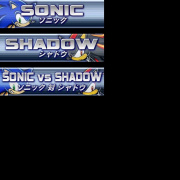 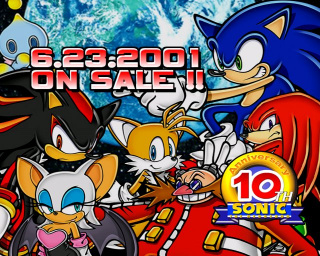 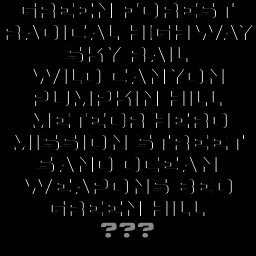 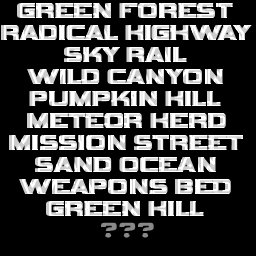 Green Hill is listed among text for 2P vs. stages. In-game however, the list doesn't scroll down this far. If it's forced to do so, Green Hill can be selected and is fully functional as a 2 Player stage.

Early menu system in English and Japanese. Note how Playground and Library are listed, but were not a part of the final game. The Black market was also unused in this game, but were used in the updated GameCube port. A Black market was actually available in the Dreamcast version but was only accessable on a website.

These graphics were used for another menu system. Rather than drawing out the text the text would have been placed on top of these.

There are a few remnants of a World Ranking system in the game disc. It was in Sonic Adventure but it was left out of this game. The following text could be found in Advertise.prs. advsng_3.adx refers to the regular menu music which would have been used here also.

After further digging in the disc more text is revealed which would display onscreen. There was a login and registration (probably to reduce cheating). The rankings could have been searched by country and name. It referred to the world ranking system as "The Sonic Network." The text was translated into numerous languages such as French, German, Japanese, Spanish.

The images below display remnants of the world ranking system also:

The menu in the first picture indicates the presence of a Black Market. The second picture was actually from Sonic Adventure 2's website. The textures shown in the third picture were extracted from AL_STG_KINDER_BL_TEX.PRS on the game disc.

The first picture shown can be found in-game and provides solid proof of a Chao Playground existing at some point. The second picture actually shows some textures which were extracted from AL_STG_KINDER_PL_TEX.PRS on the game disc.

These images show an unused Library for the Chao Kindergarten. The models are found in CHAOSTGKINDER.PRS and the textures in AL_STG_LI_TEX.PRS.

The following images show various themes which can be found on the disc, but are not usable.

The nexus memory card save containing one theme can be downloaded below:

Hidden inside the disc is early maps of various levels. These maps don't go into very much detail and in a few cases disagrees with the level layout found in the final game. 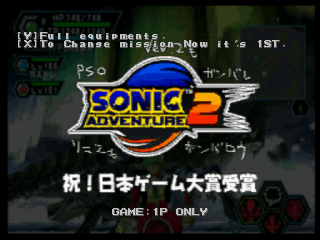 In the PC version, you can use a memory editor to go to 434687 and change CC 76 8B 00 to 98 8F 8B 00. The code to display the menu items onscreen was removed in the PC version, but it still functions.
The menu has the following options to choose from:

The GAME and DEMO options will ask you to choose a character or character set and a level. The list of levels includes all that character's normal stages, the test level (listed as BASIC TEST), Chao World (misspelled as CHAO WARLD) and occasionally SONIC TEST or KNUCKLES TEST, which do not exist in any released version of the game, and crash if you try to select them.
The Event Test not only lists all the events and allows you to view them, you can also stop cutscenes with the B button, and speed them up or slow them down with the shoulder buttons, even making them run in reverse. Video of cutscene viewer

Within the file containing the text for each level's missions, two stages have unused text. For level 0, the test level:

For level 2, a level which does not exist in any released version of the game:

These texts can be seen ingame via RAM editing in the PC version.

NOTE: The following information applies to Sonic Adventure 2: Battle only.

Within the game's text, there are lines indicating that Super Sonic and Super Shadow were meant to be unlockable characters in the game's 2P Vs. mode.

In the final game, completing Green Hill with an A rank doesn't give you anything.

These lines are similar to the descriptions for the other characters in 2P mode.

In the dreamcast version of Sonic Adventure 2 the Chao Doctor in the Kindergarten describes the player's Chao with a variety of text that was removed in subsequent ports. Among the lines the Chao Doctor uses are those that describe the player character's relationship with the Chao. Surprisingly, when viewing the game's files it can be seen that the Chao Doctor also contains lines for Amy: