For the identically-named boss from Sonic & Knuckles, see Egg Golem.

The Egg Golem is a boss that both the Hero and Dark sides have to fight against in Sonic Adventure 2 inside Eggman's pyramid base.

The Heroes side of the story has Sonic dueling the Golem which is under Eggman's control.

Sonic fights the Golem in a circular arena that is somehow floating above quicksand. The Golem is not an impossible boss, but he does have certain attacks that should be tried to be avoided.

The way to defeat the Golem is by hitting the control module located on his head. There is two ways to get reach his head. 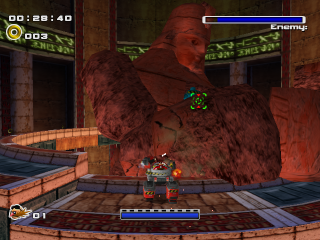 The Dark side of the story has Eggman fighting the mighty Golem.

The bad doctor get a taste of his own medicine. Right after Sonic defeats the Golem, it is learned that he didn't destroy it, but damaged Eggman's control module. The Golem once again regains control over himself and attacks Eggman. Once again, Eggman is in the same arena Sonic was in, but the quicksand at the bottom has platforms for Eggman to land on, as Eggman sinks in sand. Eggman must shoot the the power generator of the Golem to defeat it.