The following are instruction manuals for the Sega Dreamcast game Sonic Adventure 2. 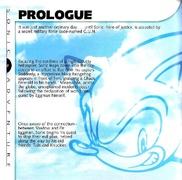 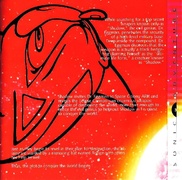 It was just another ordinary day ... until Sonic, hero of justice, is accosted by a secret military force code-named G.U.N.

Escaping the confines of a high-security helicopter, Sonic leaps down into the city streets in an effort to flee from him captors. Suddenly, a mysterious black hedgehog appears in front of him, grasping a Chaos Emerald in his hand. Meanwhile, across the globe, unexplained incidents occur following hte declaration of world conquest by Eggman himself.

Once aware of the connection between Shadow and Dr. Eggman, Sonic begins his quest to stop their evil plan, helped along the way by his old friends: Tails and Knuckles.

While searching for a top secret weapon known only as "Shadow," the evil genius, Dr. Eggman, penetrates the security of a high-level military base. Deep inside the compound, Dr. Eggman discovers that the weapon is actually a black hedgehog claiming himself as the "ultimate life form," a creature known as "Shadow."

Shadow invites Dr. Eggman to Space Colony ARK and reveals the Eclipse Cannon—an enormous weapon capable of destroying the world, more than enough to entice the evil genius to help out Shadow in his quest to conquer the world.

Just as the begin to revel in their plan for destruction, the villains are startled by a menacing bat named Rouge who offers her help as well.

Thus, the plot to conquer the world begins.