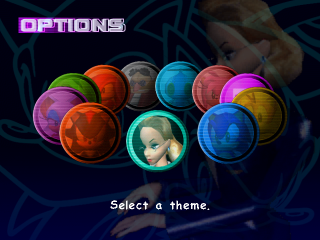 Each theme file features a character from the game (the six playable characters, Amy Rose, Omochao, Maria Robotnik, and bafflingly, the President's Secretary) giving voiceovers for menu themes and appearing in the background of the Options Menu. The Amy Rose, Shadow the Hedgehog, Omochao, Maria and Secretary themes were never officially released on the US website for public downloading. Each of the themes takes up two blocks in the VMU; all ten themes are included in the download below.

In the GameCube version, the themes of the six playable characters are available by default. Omochao, Amy, and Maria's theme can be purchased in the Black Market in Chao World after collecting a certain amount of Emblems, while the Secretary's theme can be unlocked by rotating the left stick clockwise until a chime is heard on the theme select menu. In the 2012 version, the Battle DLC is required to use the themes. The themes were slightly redesigned.

A similar concept was used in Sonic Adventure DX where the last-played character would give the menu voiceovers.