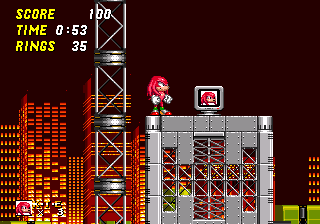 When Sonic & Knuckles detects that Sonic 2 is locked on (it checks for Revisions 00, 01 and 02), it transfers control to a special hidden 256 KB ROM chip, often referred to as the UPMEM. This contains the code for the entire game, as well as some data (e.g. the graphics of Knuckles in the Special Stage). The only code run from the locked-on Sonic 2 ROM is the sound driver, although much of the game's data is accessed from the Sonic 2 ROM instead of being duplicated in the UPMEM.