The following are the instruction manuals for the Mega Drive version of Sonic the Hedgehog 2. 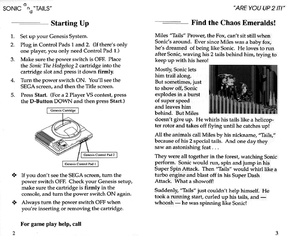 Miles "Tails" Prower, the fox, can't sit still when Sonic's around. Ever since Miles was a baby fox, he's dreamed of being like Sonic. He loves to run after Sonic, waving his two tails behind him, trying to keep up with his hero!

Mostly, Sonic lets him trail along. But sometimes, just to show off, Sonic explodes in a burst of super speed and leaves him behind. But Miles doesn't give up. He whirls his tails like a helicopter rotor and takes off flying until he catches up!

All the animals call Miles by his nickname, "Tails", because of his two special tails. And one day they saw an astonishing feat...

They were all together in the forest, watching Sonic perform. Sonic would run, spin and jump in his Super Spin Attack. Then "Tails" would whirl like a turbo engine and blast off in his Super Dash Attack. What a showoff!

Suddenly, "Tails" just couldn't help himself. He took a running start, curled up his tails, and - whoosh - he was spinning like Sonic!

But now something frightening is happening. Sonic's friends are disappearing. In their place, nasty metal robots are popping up all over the island. The mad scientist Dr. Robotnik is at it again!

This time, Robotnik's planning a global disaster. He needs workers to create a doomsday machine that can take over the world. So he's trapping all the animals, turning them into robots, and forcing them to build his ultimate weapon, the Death Egg!

Robotnik now rules the factories, refineries and cities! He's grabbed control of everything - except the 7 Chaos Emeralds. These magnificent gems are believed to hold exceptional powers. With them, Robotnik could have the entireworld in his grasp. And he'd never let go!

The Chaos Emeralds are buried somewhere on the island. Only one tough dude with spiky hair has the speed to find them first!

Help Sonic stop the devious scheme of the demented scientist! Spin like a speedball through space. Grab Power Sneakers and loop 'til you're dizzy. Twirl over twisting speedways and rocket through tunnels. Balance and blast across a bubbling ocean of oil!

Find the Emeralds, free the animals, and squash Robotnik forever!

Sonic happened to discover the island during his usual carefree adventure.
It was a small island with a pleasant green meadow.
"Okay, I'm gonna rest for a while."
Sonic's beloved Tornado slid into the shadow of the island, drawing a white arc with exhaust smoke—and as if following it, a suspicious glowing object disappeared on the other side of the island.

The legend of the phantom island of "Westside Island."
In the distant past, the people of the island used mysterious stones to develop their civilization and achieve the prosperity they desired.
However, all of that prosperity came to nothing overnight when people tried to use the stones incorrectly, and the stones were sealed away somewhere on the island by the gods.

One day, a few days after landing on the island, Sonic noticed that someone was following him.
When he turned around, he saw that it was a small fox. When the fox noticed Sonic, it rushed to hide behind a palm tree. However, when Sonic started running, the fox did its best to follow him.
"Well, I guess I'll let him do what he wants." Sonic decided, not really caring.

"Miles Prower" is a little fox.
Miles has two tails. That's why the animals on the island call him "Tails."
Because of his two tails, he was often bullied. But after seeing Sonic come to the island, Miles changed. He has made up his mind.
"I wanna be cool too!"
It was then that Miles started chasing after Sonic all day.

A flash of light glittered in the forest.
It was followed by a huge explosion and a rising pillar of fire. Pebbles and splinters of wood rained down.
Miles was almost blown away and rolled under the plane, his eyes fluttering as he tried to comprehend the situation. In his eyes, he saw a forest burning red and robots digging in the ground as if searching for something.

The explosions continued unabated and the flames covered the island. Miles, who had been staring blankly at this, turned his head to the side when he felt the presence of someone. There was Sonic, glaring at the burning forest.

"Darn it, Eggman!" As he muttered that, Sonic kicked up the sand and headed for the forest.
Something had started. Something unthinkable.
With this premonition in mind, Miles unconsciously started running after Sonic's back...

"Daahahahahah!!"
In the forest, a familiar, vulgar high-pitched laugh was echoing. It was him. It's Dr. Eggman.

"I've finally found it. The island where the Chaos Emeralds lie, the phantom Westside! Ah, it's a good thing I've been chasing after Sonic. Now I can complete my ultimate weapon, the Death Egg. I'll be waiting for you, Sonic! This time, this time, I'm going to defeat you and get all the Chaos Emeralds! And then I, Doctor Eggman, will be the conqueror of the world! Daaahahahah!"

The actors are all here. The story of adventure and excitement is about to begin once again!

Because of his two tails, he was bullied by everyone when he was little and was timid, but meeting Sonic and striving to be like him made Miles's personality bright, energetic and positive.

Sonic doesn't seem to be paying attention to Miles, but he's actually looking at him sideways.

Evil genius scientist. He wants the Chaos Emeralds. His life's work is world domination. His rival is Sonic.

Sonic's beloved plane, the Tornado. At normal speed, the Tornado can only reach 450km/h, but by installing a custom booster engine tuned by Miles, it can fly past the speed of sound despite being a propeller-driven aircraft.

An all-purpose capsule mecha created by Dr. Eggman. By changing its attachments, it can travel across water, land, air, and even dive underground. He believes that Sonic won't be a threat to him with this piece of scientific power, but...