Flying Eggman (フライングエッグマン)[1] is the eighth boss of Sonic the Hedgehog 2, which resides within the third Act of Metropolis Zone, the heart of Dr. Eggman's Earth-bound base of operations.

Once Sonic and/or Tails arrives in the boss arena, the diabolical doctor descends from the skies once again, hovering in his Egg Mobile. This go round, seven white orbs circle around the ship, spinning wildly in their predetermined orbit about Eggman. Just like the other bosses Sonic has gone up against, the weak point is the ship itself, meaning that as long as the orbs are present, Eggman is unable to be completely defeated.

Unfortunately for Sonic, the white orbs prove to be fatal for the hedgehog - even curled up in the spin attack and landing a hit on any of them will result in damage, a mad scramble for rings becoming all too common in this match. The best way to land a hit against Eggman, however, is also the one that requires the most patience. Though it may be possible to sneak a hit in when Eggman first appears and moves about the screen, any window of opportunity only exists for a split second. After jumping over Eggman a couple times, though, Eggman will float into the middle of the arena, the seven orbs extending towards the outermost regions of the screen. When they eventually retract, the orbs do nothing but calmly circle the middle of the Eggmobile, leaving both the top and the bottom open to attack. This is the best time for Sonic (or Tails) to curl up and hit the mad doctor.

Instead of having one of the orbs simply disappearing, Eggman will float up to the top of the screen out of reach, one of the orbs leaving orbit and turning into a balloon in the shape of Eggman riding about his hovering craft. While they can be dangerous if left about, a single hit will pop it, causing Eggman to once again descend and try to attack. Repeating the process multiple times will soon leave holes in Eggman's defenses, neither Sonic nor "Tails" having to wait for the remaining orbs to reach their static middle orbit. With these gaps, the window to hit the mad genius during his initial decent and ride around the screen increases, and in no time the seven orbs will have disappeared, each Eggman-shaped balloon nothing more than a memory. 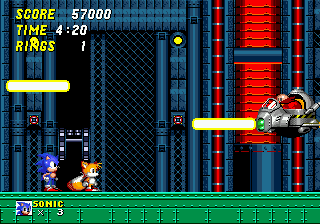 Once the seven fake Eggmen are destroyed, watch out for the laser cannon.

Not yet willing to go gently into that good night, Eggman has one more trick up his sleeve. Moving to either side of the screen, the front of his craft reveals itself as housing a laser cannon inside, the craft soon firing as it moves closer and closer to the ground. An aware player, however, can run underneath and hit the Eggmobile during or even before the first shot. With eight hits once again successfully struck, the Eggmobile's defenses are worn out, Dr. Eggman forced to escape to his Wing Fortress, Sonic and "Tails" first freeing the animals inside the capsule and then heading out to the Sky Chase Zone.

There are two other methods to defeating the Flying Eggman, though not nearly as graceful. The first holds a degree of impatience, and requires at least one ring to be in possession of the player. When Eggman first appears and begins his strut around the screen, try to land a hit upon him. More then likely this will result in the player being damaged, but because of the brief moment of invulnerability, a quick second jump will make contact with Eggman, causing one of the orbs to discharge. However, one must be quick on their toes and also recollect at least one ring before it fades away, or else this can not be attempted again, one wrong move meaning the surrender of one life. A second method requires a second controller and the player to have both Sonic and "Tails" on the screen at once. Because of "Tails" having infinite lives and invulnerability, one can control him and make him the primary attacker of Eggman. Though not nearly as graceful and taking the easy way out, it gets the job done in the end.

This boss is revisited in Sonic & Knuckles during Sonic and/or "Tails" second encounter with Mecha Sonic in the Sky Sanctuary Zone. However, the boss proves to be slightly easier, the player able to hit the Eggmobile without getting hit during its initial run with a slightly wider window of opprotunity than in Sonic the Hedgehog 2. Even better, Tails can fly up and avoid it altogether.

A similar boss is featured at the end of Mad Gear Zone in Sonic the Hedgehog 4: Episode I.