Wood Zone is a wood-themed level planned for the Sega Mega Drive version of Sonic the Hedgehog 2. It was designed primarily by Brenda Ross but was never finished, ultimately being pulled from the game before release. It hosts flora and fauna in its backdrop, and an elaborate maze of trees in the foreground.

Wood Zone is thought to be Brenda Ross' second Sonic 2 level, after the also unused Sand Shower Zone[1], with Ross claiming the art was 50% finished before being scrapped[1]. No boss was ever created for the level.

What happened to the zone?

In the Final version of Sonic the Hedgehog 2 Wood Zone had a ID known as zone ID 02 and was accessible by going to Death Egg Zone on the Level Select. If Death Egg Zone is entered with PAR code FFFE10:0300 Wood Zone will be accessed. This has a leftover background and some color pallets. 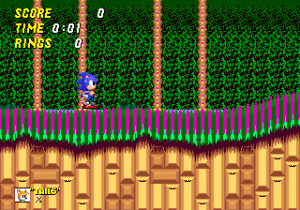 Wood Zone in the final game.

Unlike several scrapped stages, Wood Zone was at one point partially playable within Sonic 2, being present in the "Simon Wai" prototype and the Aug 21st "Alpha" prototype. Both prototypes show a very unfinished Act 1 which ends rather quickly, while the second Act is little more than an empty level slot with a palette. The music of Metropolis Zone plays in the stage.

Due to some wonky collision, it is impossible to go up the ramp near the beginning. There are some other ledges that seem to involve falling in and out of trees, and a U-shaped platform at the top left. Set near the end are wooden versions of the Metropolis Zone conveyor belts, though they don't function correctly, and one of them is partially broken.

For whatever reason, there’s some extra ledges at the end for what could be a goal point of sorts, though no other level in between, strangely.

The level seems to have been worked on after the Simon Wai prototype, as new background scrolling data is present in revision 00 of the final game. While the graphics and stage layouts were removed, it can still be accessed in the final game by using the Game Genie code ACLA-AECY (AB6X-AEBR in Knuckles in Sonic 2) - go to the stage select menu and select Emerald Hill Zone (Special Stage in Knuckles in Sonic 2), and Sonic will be taken to a broken stage with Emerald Hill Zone graphics and the old Wood Zone palette.

The life icon at the bottom left of the screen shows Tails' icon and name regardless of the character chosen; the music selection remains Metropolis Zone, as assigned in the earlier prototypes.

With Sand Shower Zone unlikely to have been added to the game at any point and Wood Zone being removed almost completely, no artwork created by Brenda Ross is thought to have made it into the final release of Sonic 2.

While the Time Travel concept was still being considered for the game, Wood Zone was originally going to be the Present version of Casino Night Zone. That concept is somewhat reused in Sonic Forces with Casino Forest.

Some early concept art shows an idea for this level under the name Secret Jungle (showing Sonic bouncing off from a spring-like plank on a tree and going upwards, which could imply the level would involve a lot of vertical scrolling); the timeline map however calls the level by the more familiar Woods Zone.

The rather more fleshed-out title Secret Jungle, paired with the aforementioned concept art's suggestion of vertical scrolling (as well as the few implemented graphics and palette in-game) could suggest the layout would have been reminiscent of Jungle Zone on the Master System version of Sonic 1.