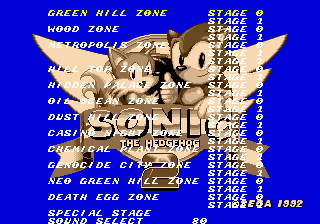 The Level select, also known as "Zone Select" for Sonic games since the levels aren't called levels, but Zones, is a menu from which the user is able to access any level in the game, as well as other features.

The level select allows the user to search through (usually) a menu with a listing of different levels in a game then lets them choose whichever level they wish to play. Not only does this allow the common end user to start the game from any level they like, but is another very useful feature for debugging/development - prototype builds of Sonic games generally have the level select enabled by default for quick and easy access by the development team, while the level select screen in final builds require the user to unlock it via cheat code.

In Sonic the Hedgehog 2, Sonic the Hedgehog 3 and Sonic & Knuckles, enabling the level select cheat will also enable the reset/slow-motion/frame advance cheats while paused. It will not, however, enable object placement or (in Sonic & Knuckles' case) gravity reversal, which require edit mode to be activated. Some level select screens may offer access to the following:

From the 2000s onwards, some games such as Sonic Advance feature a level select screen that is normally accessible to the end user without any cheat code required, though levels must be unlocked by progressing through the game.