Mushroom Hill Zone is the first Zone of Sonic & Knuckles and the seventh Zone in Sonic the Hedgehog 3 & Knuckles. In the latter, it is entered by Knuckles falling in and Sonic being dropped off by Tails from Launch Base Zone. In the Sonic 3 level select, the Zone is listed as Mushroom Valley, the early name of the Zone at the time.

This is the first 1 Player Zone ever in which Knuckles the Echidna is a playable character. Starting a new game as Knuckles in Sonic & Knuckles presents a small scene where he is attacked by one of Dr. Eggman's Eggrobos. Note that this scene is only shown in Sonic & Knuckles, not in Sonic 3 & Knuckles. 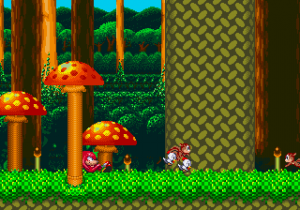 Knuckles relaxing in Sonic & Knuckles, just before he gets bombed by an Eggrobo.

Set within a sprawling forest under a thick canopy, Mushroom Hill Zone is known for the many mushroom types that the player find. There are some that they can bounce off of, a seesaw-type mushroom that can be used to jump to a higher elevation, ones that act as falling platforms, and parachute-type mushrooms the player holds onto to float into the air. There are also vines that extend into bridges when crossed, and some that stick the player to the ground until they Spin Dash their way out of it. There are hand-operated lifts with a pair of handles on them, and the player can crank down the handles to move the lifts up by pressing

with rhythmic timing. When Sonic and Tails are together, both of them can grab a handle each and pull down on the handles simultaneously to make the lift rise faster.

Another unique feature about this Zone is that in the second Act, Dr. Eggman is using a satellite to change the climate, causing Act 2 to be played in different seasons. Thus, the palette changes from a summer green scenery to a autumn brown to a winter gray. This changes back to summer again when the player's character gets to the boss and destroys Eggman's satellite. This can be related to the scrapped Sand Shower Zone, which would have changed from a desert orange to a winter blue halfway through.

This is also the only Zone in Sonic & Knuckles to be altered when played as part of Sonic 3 & Knuckles: Act 1 is slightly extended at the beginning and has an additional Giant Ring (or two, if the level is played as Knuckles), making it even easier to get all the Super Emeralds in this Zone alone. A cutscene is played shortly after Sonic and Tails begin the Zone, showing Knuckles checking his surroundings before coming out of a passage and closing a door behind him, hinting to the player to look inside.

At the end of Act 2, Eggman/Eggrobo flees in the Flying Battery, but the player's character(s) runs after it and catches a ride.

In the Sonic the Comic series, Mushroom Hill Zone was used as a temporary village by the many residents of the Emerald Hill Zone who had fled from Dr. Robotnik's tyranny, with the many mushrooms in the valley being hollowed out and turned into homes. Once Robotnik's dictatorship finally ended, the Emerald Hill folk abandoned the Zone and returned home.