This comic features one story: "Sonic the Fugitive".

Having been convicted of treason and murder, Sonic the Hedgehog is led by Geoffrey St. John and his guards to his fate, with Uncle Chuck and Muttski watching, sombrely, nearby. Sonic continues to plead to Geoffrey that he didn't kill Sally Acorn, and that he didn't even know she was dead until he returned to Knothole. Geoffrey, following the King's orders, punches Sonic in the gut, informing him that no matter what, he is going to the Devil's Gulag to live his life. The punch forces Uncle Chuck to come in and break the two up, as he informs Geoffrey that he is supposed to escort Sonic, not beat him up.

The group arrive at Antoine's plane. As Sonic boards it, handcuffed, Antoine asks Geoffrey and his guards to make sure they don't scratch his plane. Geoffrey confides with Antoine, ensuring him that the plane and his men will return, but Sonic will not. Before Sonic disappears in the plane, Uncle Chuck tells him that he will find a way to get him back.

Later that night, while a storm brews, the Freedom Fighters, along with Amy Rose and Rosie, meet in a hut to discuss the events of that day. Everybody is overwhelmed with emotion, while Tails still doesn't believe that Sonic could've killed Sally. Despite wishing so, Bunnie Rabbot and Antoine both agree that they saw him commit the act with their own eyes. Uncle Chuck, aside, also agrees with Tails, believing that Sonic did not commit the murder. Despite that, Rotor still wonders how he could've done it, causing Uncle Chuck to yell out, again, that Sonic didn't do it. Suddenly, Dulcy bursts her head in through one of the hut's windows, just hearing the news and sobbing loudly. Rosie walks over and tries to comfort her, telling her things aren't always what they appear to be.

On the plane, riding through the same storm, Sonic sits, thinking to himself recalling what had happened earlier. He knows it all started when Sally got orders from her dad to invade Robotropolis, thinking that he was still in his crystallized state and not fully healed. Now this same King has exiled him to the Devil's Gulag, the place where all bad citizens and war prisoners are sent. Wondering how the King healed so fast, Sonic is interrupted by a familiar being. He turns around and sees the traitor Sleuth Dog sitting behind him, laughing at Sonic's fate. Sonic tries to get at him, but is tied down by some leg cuffs, while the co-pilot of the plane yell at them to be quiet. The pilot, on the other hand, yells out as he notices some SWATbots approaching the craft. Before they can initiate evasive action, the SWATbots in their own crafts fire on the plane. The pilots lose all control of the craft as it tumbles toward the ground, eventually crashing.

Shortly thereafter, the SWATbots land and inspect the wreckage of the plane. They find the pilots, alive, but unconscious. They also detect another life form, as they look over and see Sonic the Hedgehog, now free, who kicks the SWATbots out of the plane. More SWATbots arrive on the scene, but Sonic, full of anger from the events of the day, goes at full force, taking out the squad with ease. Seeing the images of Sally in his head, along with the looks of his friends, and himself in chains, he takes out the SWATbot craft, inadvertently destroying any survival equipment, running off into the storm, pondering his destiny.

Back in Knothole, Drago arrives in the King's chambers, where he meditates over his thoughts. He excuses himself for interrupting the King, reporting that the plane holding Sonic has crashed, though Geoffrey's men are fine and Sleuth is back in custody. He also reports that Sonic has escaped, making the King grin evilly, as he states that he'll have to be hunted like a dog, or even by dogs. He orders Drago to bring in Geoffrey St. John. In a short period of time, Geoffrey arrives in the King's chamber, where the King instantly accuses Geoffrey that his men failed in their task to escort Sonic to the Devil's Gulag. Geoffrey tries to convince him that his men are the best trained soldiers, but the King doesn't care, only wanting Sonic recaptured. Geoffrey bows down, pledging that he will make sure Sonic is captured, even if it is the last thing he will do.

Sonic continues to run away from the crash site in the storm, though due to the muddy ground, he is leaving tracks. He ties a large leaf behind his back to rub against the ground, thus covering his trail. He eventually arrives at a cave, so he enters it to get some rest and think further about the events of the day. While resting, before he recalls the events, he does note that he wasn't even allowed to see Sally's body. Along that note, he recalls Uncle Chuck telling him about something similar when he visited him before the sentencing. He visited Doctor Quack to see Sally's medical records, but the Doctor couldn't give them out as the King had ordered them sealed away. Due to this Uncle Chuck protested to the King directly, but he also announced that there would be no investigation and no proceedings in regard to Sally's murder. He had confided to Sonic that he wouldn't give up hope, knowing that something was wrong, and that there was still a traitor around, and that it wasn't Sonic.

All of these thoughts cause Sonic's mind to enter a state of turmoil, with unanswerable questions become endless, the grief and stress of Sally's passing cause him to fall asleep.

At that same time, Antoine, still believing Geoffrey to be a traitor, spies on him, then noticing something peculiar. He gets Bunnie's attention, who runs over, as he informs her that Geoffrey and Drago have received an audience with the King. As they sneak closer to Drago's hut, Bunnie doesn't think anything is wrong, but Antoine does. Although having an audience with the King could prove Geoffrey to be a legitimate Freedom Fighter, Drago never claimed to be under the King, and he also kept his distance from the Wolf Pack Freedom Fighters during Sonic's sentencing. They hide behind some bushes just outside the hut, while Antoine declares that he wants to be the King's number 1 soldier, and in order to do so, he must get rid of the traitors.

Drago arrives home, calling out to Hershey that the future 'duke of Robotropolis' is home. He comforts Hershey, telling her she can be the duchess, but this makes her feel uncomfortable, as she tells him that she's already done her part and she doesn't want to do anymore. While Bunnie and Antoine listen in, Drago grabs Hershey's arm forcefully, telling her she is in his plan fully. He then tells her that Sonic has escaped, and with luck, Geoffrey will find him, ultimately resulting in the elimination of both of them. Bunnie and Antoine react in shock as Drago storms out of the hut, informing Hershey that her services may be needed again. The two Freedom Fighters elect to follow Drago into the Great Forest to see what is up.

Travelling several hundred meters into the forest, the two Freedom Fighters lose track of Drago. Antoine hears a branch creak, so he turns around, only to get knocked in the head by a robotic arm. Bunnie looks over, as a squadron of SWATbots led by Drago appear from the shadows, while another bot muffles her. Drago orders the SWATbots to take them prisoner, and send them to their 'project' in Downunda.

Back at the cave, Sonic dreams about his past, playing with Muttski. Although thinking he hears Muttski growling, he slowly wakes up, realizing that the growls he is hearing are real. Outside the cave, Geoffrey and his men have arrived with two carnivorous Tasmanian Devils, one of the only species on Mobius to not fully develop. Geoffrey orders his men to take the animals into the surrounding area, while he will go into the cave personally. As he enters the cave, he finds the terrain to be dangerous to trend. Indeed, Sonic finds the terrain difficult, as he can't get a good grip as he goes deeper into the cave, preventing him from running. Despite this, he wonders how Geoffrey and his men found him so easily.

Geoffrey, holding a hand-held locater, notes that he is glad he put a bug in one of the Sonic's leg shackles, allowing him to keep track of him. Sonic hides along a wall, smelling a distinct smell, though realizes it is not the smell of a Tasmanian Devil or Geoffrey's men. Geoffrey, meanwhile, walks around a curve in the cave, as his locater goes bonkers. Sonic walks out from the wall, while Geoffrey goes around the curve, meeting eachother, fist-to-fist. Geoffrey is quick to react, throwing Sonic into a nearby wall. Running over he then kicks him to the ground. While down, Geoffrey holds Sonic's head to the ground, preparing to punch him. Before he can throw the punch, Sonic kicks Geoffrey in the face, then kicks him again into a wall, freeing him from his grip. They continue to throw punches, but accidentally fall into a nearby hole, sending them both tumbling deeper into the cave.

While the two fall to their fate, the King, in Knothole, brings together all the Freedom Fighters, including the Substitute Legion of Freedom Fighters and the Wolf Pack. He announces that, despite his daughter's death, he is pleased with the heroism that the groups have shown during his exile. Despite this, he believes that their efforts have been futile, with too much fighting and little progress, which he attributes to a lack of ability. He stands up, declaring that, because of this, he is reinstating the position of Warlord, and that he has already chosen a more-than-experienced candidate for the job... 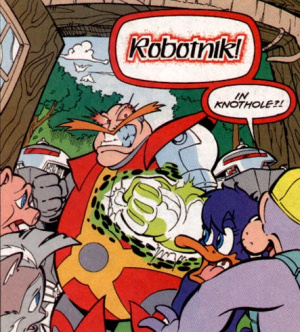 ...as Doctor Robotnik walks into the room, with a squad of SWATbots. The Freedom Fighters are in shock with Robotnik in Knothole, but Rotor is quick to react, deploying his portable gun. He expands the weapon to full capacity and fires on Robotnik, but the dictator is well-prepared, deploying a portable shield from his robotic arm. Robotnik is quite interested in the weapon, but finds it inferior, firing a laser from his robotic hand that disintegrates it. The others try to escape the hut, but the SWATbots have already surrounded the group, while Robotnik tells them to stay. Before he begins his speech, he is quick to notice both Uncle Chuck and Muttski, finally realizing why many of his plans have been ruined. He grabs both of them, scrambling their brains and reverting them back to their robotic state. He then closes the door, saying that everybody requires an attitude adjustment, and that shouldn't be a problem, as he had plenty of time to do it. He laughs manically, which can be heard through the whole village.

In the cave, Geoffrey and Sonic reach the bottom of the whole, still duking it out. As they continue to fight, Geoffrey calls out Sonic as a murderer, but Sonic still attempts to convince him that he didn't murder her. While holding each other at their throats, they both announce that they love Sally. After their tirade, Sonic gets Geoffrey off of him and kicks him aside again, knocking him out. He runs along the cave corridor, seeing light at the end of the tunnel. He reaches the opening, only to realize it just leads to a cliff, beside a waterfall. Geoffrey is quick to wake up, approaching Sonic at gunpoint.

Between a rock and a hard place, Sonic takes a risk. He jumps out of the opening, down the cliff, missing Geoffrey's shot, but plunging down toward the ground.