Notable features of Hidden Palace include green bridges which glow if Sonic or Tails walk on them. This is actually the same object as the bridge in Emerald Hill Zone, but is set to glow if the level number is that of Hidden Palace's. Also featured is a large ramp towards the end of the level, whose collision means it cannot be climbed without positioning Sonic on it with edit mode. Moving up this ramp will lead to the top of the screen, however using edit mode again will show that it continues at the bottom of the level, leading to a bridge covered in waterfalls and inevitably a platform to nowhere. 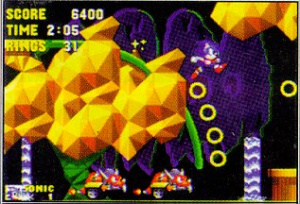 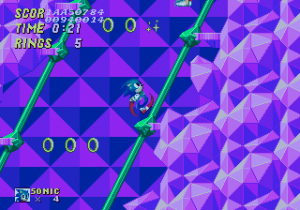 An additional Badnik was designed for the 2013 remake:

at the level select screen). It is impossible to complete the level without placing a capsule with edit mode. All the items in edit mode that can be placed are from Oil Ocean Zone. "Beating" both Acts will take the player to Oil Ocean Zone.

As of version 3.0.9, the original version of the stage, as seen in prototype versions of the original game, can be accessed through a code on the stage select menu. After entering the edit mode cheat, playing the sounds 03, 03, 03, 0B, 10, 10, 10, 04 and selecting "Hidden Palace" will take the player to the Proto Palace Zone, which is Hidden Palace's original layout as seen in the Simon Wai prototype. Unlike its revised counterpart, this version of the stage uses Track #10 as its default background music. The single giant emerald present has a unique behaviour only seen in this version of the stage, acting as a warp which takes the player back to the stage select. 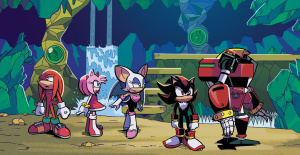