Sonic Mania Plus (ソニックマニア・プラス) is an upgraded re-release of Sonic Mania that was released in 17 July 2018. This re-release has new characters Mighty and Ray as well as a new Encore Mode and 4-player Competition Mode.

In addition to being released as paid downloadable content to all digital copies of the original game, this definitive version received a physical release which includes a holographic slip cover, a reversible Sega Mega Drive-themed sleeve, and a 32-page art book. Players from Japan also get a soundtrack album with two discs. The discs include all Sonic Mania tracks (excluding compositions by Masato Nakamura), all Hyper Potions tracks (including Time Trials Plus) and all Mania Plus songs.

Around the time of Sonic Mania Plus's release, a v1.04 patch was released for the base game which includes many changes and bugfixes from Plus, but does not include the extra characters and modes.

Sonic Mania Plus has all the content of the base game, but also adds additional content featured only in this update:

Mighty the Armadillo and Ray the Flying Squirrel return as playable characters for the first time in over 20 years, and are playable in all gameplay modes with their own unique abilities. In Mania Mode, they will play the same stages and bosses as Sonic and Tails.

Mighty is a natural pacifist, but is sometimes forced to fight to protect those he cares about, such as Ray. He boasts remarkable defensive power, as his hard shell can protect him from spikes, attacks and projectiles when he curls up into a ball. He is also capable of performing the Hammer Drop, which makes him blast downward in a burst of speed, slamming Badniks and obstacles and making hidden items fall out of trees.

Ray is slightly younger than Mighty, but he makes up for his lack of strength with pure enthusiasm and excitement, and a love for adventure, often gliding to high places to get a view of the land below. He can use this same technique, the Air Glide to soar through the air and even gain extra altitude.

Encore Mode is a brand new game mode that takes place after the events of Mania Mode and Sonic Forces, and sees the player progressing through altered zones with new gameplay rules.

In the beginning of Encore Mode, Sonic returns to Angel Island Zone after helping the Resistance in Sonic Forces (according to the official instruction manual). However, as soon as he reached the ground, the Phantom Ruby came out of the portal he came from and starts going to the right. Sonic chases the Phantom Ruby through the jungle, and soon sees a capsule with past acquaintances Mighty and Ray trapped inside, trying to break out. Sonic frees them both, and chooses to travel with one of them; the other one being Heavy Magician in disguise. Heavy Magician steals the Phantom Ruby, and the two heroes track her down to the broken-down Hard Boiled Heavies. Heavy Magician then gives the Phantom Ruby to Heavy King and the Heavies spring back to life, activating the Ruby's powers once again. This two heroes are sent back to a slightly-different Green Hill Zone at sunset. Now Sonic, Tails, Knuckles, Mighty and Ray have to stop the returning Hard Boiled Heavies and Dr. Eggman from ruling the world once and for all! 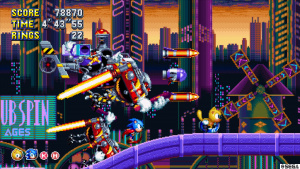 Ray and Sonic at the Heavy Gunner boss in Encore Mode.

Encore Mode takes all of the zones from Mania Mode (except Egg Reverie Zone) and remixes them with different color palettes. This is not simply a copy-and-paste job, as new areas and differences in object placement makes Encore Mode look like an expanded version of Mania Mode. New pathways make use of all of the five characters' abilities (including newcomers Mighty and Ray). Bosses are now either easier or harder. Some Giant Rings have been rearranged to new locations. The Special Stages are the same kind as Mania Mode's, but the backgrounds are in reverse order, and the stages themselves are more difficult. A brand new Bonus Stage set inside a giant pinball table has been added, and can be accessed from any Checkpoint with at least 50 Rings.

The biggest change to Encore Mode is the party and lives system. At the beginning, the player starts with Sonic and either Mighty or Ray. This is because of the new party and lives mechanic. The player is in control of one of the characters while the other is controlled by the AI and can be switched by pressing

The Competition Mode is expanded to allow up to four players simultaneously. When playing with two or three players, player 1 can customize the screen division which was a big problem in the original.

Sonic Mania Plus also adds the option to save replays of completed Time Attack attempts. The player can save as many replays as their system's storage will allow. Once a replay has been saved, the player can play back the replay, or challenge it. When challenging a replay, the player's previous attempt will be shown as a ghost during gameplay.