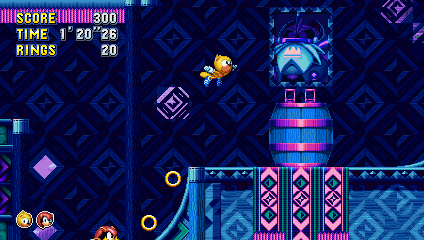 Not to be confused with the Power Glide.

The Air Glide (エアーグライド Eāguraido)Media:SonicManiaPlus_FamitsuMagazine_01.jpg[1] is a move performed by Ray the Flying Squirrel in Sonic Mania Plus.

Using his natural furry skin membrane to catch a ride on the air currents, Ray can glide through the air similar to how Knuckles can glide. What sets Ray's gliding apart from Knuckles' is that the player can steer Ray into a nosedive and then steer him upward again in order to regain some altitude and extend Ray's gliding distance.

To perform this move, one of the jump buttons must be pressed and held in midair after jumping to start gliding, then the player must use

to steer Ray up or down. They must be careful while gliding, as Ray cannot defeat enemies like Knuckles can, and will take damage if he collides with an enemy while gliding. By releasing the jump button, Ray will cancel the glide and curl up into a ball for safety. The move can only be performed once per jump.