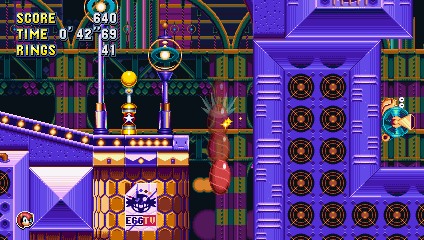 The Hammer Drop (ハンマードロップ Hanmādoroppu)Media:SonicManiaPlus_FamitsuMagazine_01.jpg[1] is a move performed by Mighty the Armadillo in Sonic Mania Plus. This move is similar to the Bounce Attack that is typically used by Sonic.

To perform this move, any of the jump buttons must be pressed in midair after jumping, making Mighty drop directly downward with a burst of speed so great that he leaves afterimages in his wake. This not only deals damage to Badniks, but can also pierce through them, and can even take out the Beanstalk enemies in Stardust Speedway Zone. The resulting shockwave from hitting the ground will also take out Badniks close to Mighty as well as making hidden monitors fall from trees. He can even use this move to destroy certain obstacles and clear out holes in the terrain, allowing access to new routes.