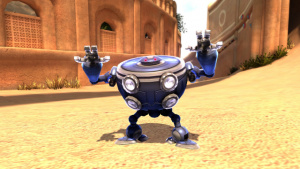 An Egg Fighter in Savannah Citadel.

Unarmed Egg Fighters roam around, approaching Sonic if they spot him. They attack by using a spinning move with their arms outstretched. They resemble a cross between SatAM / Sonic Chronicles' SWATbots and the Egg Pawns from previous Sonic games, while expanding on their arsenal of weaponry and accessories. Even when destroyed, Egg Fighters may keep fighting; some of the robots have modified, autonomous hands, which attack from the wreckage as Little Fighters.

Egg Fighters and their Sword sub-variants reappear in Rooftop Run in the console/PC version of Sonic Generations.