Sonic the Hedgehog is an American animated television series created and produced by DIC Entertainment, in association with sega:Sega of America|Sega of America]]. Based on the video game franchise of the same name, the show follows the exploits of a band of Freedom Fighters who work together to overthrow the tyranny of the evil Dr. Robotnik. Airing on the ABC Saturday morning programming block, it premiered concurrently with the syndicated Adventures of Sonic the Hedgehog, also produced by DIC. The production was also co-produced by Italian studio Reteitalia S.p.A. in association with Telecinco. The animation work was outsourced to foreign studios throughout its entire run, such as Saerom Animation in Korea.

To help differentiate it from other media also called Sonic the Hedgehog, fans of the series began referring to it as "SatAM," due to the time slot in which it premiered. Unlike the weekday Adventures of series, the weekend program strived to tell more serious stories,[1] featuring a unique cast of characters who fought alongside Sonic. Though these characters were never part of the mainline video game universe, they were extensively used in various western media in the 90's, appearing monthly in the pages of Sonic the Hedgehog published by Archie Comics and cameoing in the Mega Drive game Sonic the Hedgehog Spinball. The leader of this group, Princess Sally Acorn, was also prominently featured at Sega World Sydney. 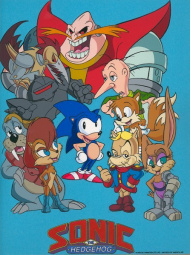 The primary cast of Sonic the Hedgehog season one.

Sonic the Hedgehog is a serialized narrative focusing on the exploits of the title character and his cohorts, the Freedom Fighters. Living in the hidden community known as Knothole Village, the small band of heroes work together in the hope of overthrowing the evil tyranny of Dr. Robotnik and his nephew, Snively.

Ten years prior, Robotnik, then known by the name Julian, was conscripted into the king's service during a conflict known as "The Great War." Given the title of Warlord, Julian created a number of machines that were used in defense of the kingdom, patrolling the streets of Mobotropolis with a cheerful demeanor. Once the conflict was over, the king wasted no time in letting known his desire to decommission the army, wishing to promote Julian to the position of Minister of Science. Unbeknownst to the king, Julian had already begun planning a coup d'etat.[2]

Storming the castle with his robotic army, Julian rechristened the city "Robotropolis," named after his new moniker. In no time at all, the realized dictator terraformed ninety percent of the city, turning it into a polluted, technological wasteland. Exiling the king to a dimension known as "The Void," the doctor faced little resistance in his securing of power, capturing eighty percent of the population. Utilizing a stolen piece of technology, the Roboticizer, he transformed those he had imprisoned into mindless, robotic slaves, including its inventor, Sonic's uncle Sir Charles Hedgehog.[3]

Among those who were able to escape was the king's young daughter, Princess Sally, and her childhood friends. Hiding in the Great Forest, they eventually became the group known as the Freedom Fighters, a band of heroes who use their wits and limited resources to wage war against the dictator who took their home. Together, they hope to overthrow Robotnik, restore the king, and deroboticize their family and friends.

In addition to Sonic and Sally, the core group of Freedom Fighters feature Rotor Walrus, a mechanical genius, Bunnie Rabbot, a half-roboticized rabbit who uses her transformed limbs to the group's benefit, and Antoine Depardieu, a would-be royal guard whose cowardice provides comic relief. Miles "Tails" Prower, a two tailed fox who strives to become a full-fledged Freedom Fighter, is often left behind on missions due to his young age. The second season also saw the introduction of Dulcy, a powerful dragon whose natural abilities include fire breath, ice breath, and flight.

While sometimes it may look like they are fighting a losing battle, the heroes do have a handful of resources that Robotnik does not have control over. The first of these, Nicole, is a sentient hand-held computer operated primarily by Sally. The device is able to bypass most of Robotnik's security measures, becoming an aid in both infiltration and information. Knothole is also home to the Power Ring Grotto, which produces a power ring every 12 to 24 hours. Invented by Uncle Chuck, a device on the lake bed creates the ring, which when held by Sonic gives him a dose of super speed and power that can help him escape the stickiest of situations.

As the second season progressed, the Freedom Fighters found an ally in the roboticized Sir Charles, Sonic's uncle becoming an intelligence agent after having his free will restored.[4] Befriending other freedom fighter groups such as the Wolf Pack,[5] the fight between the heroes and Robotnik culminated in the season two finale, "The Doomsday Project." Banding together to stop the ultimate weapon, Sonic and Sally are able to destroy it using the Deep Power Stones, seemingly bringing peace back to Mobius. With Robotnik gone, the heroes celebrate, oblivious to the fact that Snively has survived, the final shot of the show featuring the silhouetted eyes of a mysterious villain.[6]

On September 17th, 1993, the American Broadcasting Company aired the ABC Saturday Morning Preview Special.[7] Hosted by the cast of Hangin' with Mr. Cooper, the special promoted the network's programming lineup for Saturday mornings. Among the clips featured was a six minute segment of the episode "Super Sonic," which premiered in full at 9:00 AM EST the following morning.[8][9] Though it was not the only new show to premiere that morning on the network, extra attention was placed on the series throughout the programming block. Both before and after Sonic aired, actor Jaleel White, speaking as Sonic the Hedgehog, talked over the credits of various shows, teasing what would air next.[10]

While "Super Sonic" was the first to air, the episode was the sixth produced for season one. This airing out of order would continue throughout the entire first season, the pilot "Heads or Tails" being the eleventh episode to broadcast.[11] Even though production order was ignored, each week still saw a new episode premiere, with certain weeks featuring a rerun in the 8:30 AM EST slot. These hour long Sonic blocks would continue on and off as the show went into reruns during the first half of 1994.[12]

The second season began on September 10th, 1994, with the show being moved up to 8:30 AM EST.[13] Though intended to be aired as the second episode, "Game Guy" ended up being the season premiere, with the first episode in production order, "Sonic Conversion," airing the following week.[14] Unlike the first season, the rest of season two aired as intended. The final episode, "The Doomsday Project," was broadcast on December 3rd, 1994. Though reruns continued to air into the first week of June 1995,[15] the show would not be renewed for a third season.[16]

Though production was officially over, the cartoon would continue to find an audience in syndication. Reruns began airing in the United States on the USA Network during the "USA Action Extreme Team" morning block, lasting until 1997.[17] Outside of home video, the show would remain unavailable in the U.S. until 2012 when it joined Netflix's streaming service, where it would remain for four years. Starting in 2016, reruns began airing on the Starz Encore Family premium network, with episodes also available to be streamed through the Starz website and affiliated apps.[18] In late 2019, it was announced Sonic the Hedgehog would be joining the CBS All Access streaming service.[19] The show was carried over when the service was rebranded to Paramount+.[20]

The show has also found a home in a number of international markets. The first of these, the Canadian television station CTV Network, premiered the show on the same day as it did in America. While Sonic ended its rotation on ABC in May, the Canadian network continued to air the series through the summer, showing the finale once more on September 2, 1995. In Europe, the show initially aired in the UK on Channel 4, between 1994 and 1996. Years later, UK stations Pop and ITV2 replayed the series in syndication. The first season was also shown on Ireland's RTE Two. The series has also been translated into a number of different languages.