The following are instruction manuals for the Xbox 360, PlayStation 3, PlayStation 2 and Wii game Sonic Unleashed. 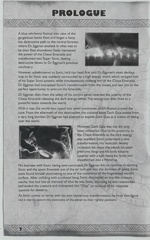 A blue whirlwind flashed into view of the gargantuan battle fleet, and began a hasty but destructive path to the central fortress where Dr. Eggman awaited. In what was to be their final showdown, Sonic harnessed the power of the Chaos Emeralds and transformed into Super Sonic, dealing destructive blows to Dr. Eggman's delicate machinery.

However, unbeknownst to Sonic, he'd run headfirst into Dr. Eggman's most devious trap so far. Sonic was suddenly surrounded by a high energy shield, which stripped him of his Super Sonic powers, while simultaneously robbing him of the Chaos Emeralds. Dr. Eggman had anticipated Sonic's transformation from the outset, and saw this as the perfect opportunity to procure the Emeralds.

Dr. Eggman then, from the safety of his control panel, reversed the polarity of the Chaos Emeralds releasing the dark energy within. The energy was then fired as a powerful beam towards the world.

With a roar, the world was ripped into seven continents, which floated around the core. From the aftermath of this destruction, the colossal beast Dark Gaia awoke from a very long slumber. Dr. Eggman had planned to exploit Dark Gaia as a means of taking over the world.

However, Dark Gaia was not the only beast unleashed. Due to his proximity to the Chaos Emeralds as the dark energy was expelled, Sonic underwent a new transformation. His muscular density increased, his claws sharpened, his teeth grew into fangs and his body became covered with a lush heavy fur. Sonic had transformed into a Werehog.

His business with Sonic having now concluded, Dr. Eggman felt no remorse in ejecting Sonic and the Emeralds out of the air lock and into the darkness of space. Sonic soon found himself plummeting to one of the continents of the fragmented world's surface. After colliding with a colossal bang, Sonic discovered an imp-like creature nearby that had lost all memory of who he was. Sonic, assuming he was responsible, befriended the creature and nicknamed him "Chip" on account of his insatiable appetite for desserts.

As Sonic comes to terms with his own mysterious transformation, he must also figure out a way to restore the continents of the planet to their rightful positions.