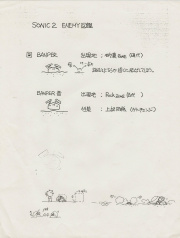 Banper is a Badnik which was set to appear in the cut levels Rock Zone and Sand Shower Zone. Its design is small with two bumpers on its sides. If these bumpers were touched they would send Sonic flying in the opposite direction. Only concept art of it has been found and may have never been used in any prototype versions of the game.

Its name is likely a mistranslation of "bumper", as bumper is rendered in Japanese as バンパー (banpā).