Sonic Battle - Finals!! is the 46th episode in the first season of Sonic X. In the English dub, it is known as A Wild Win!. This episode concludes the series' loose two-part adaptation of Sonic Battle. 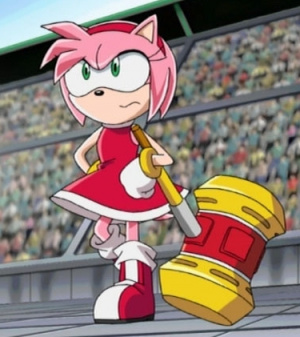 Amy preparing to fight agaist Rouge in the quarter-finals.

In the previous episode, the President organized a fighting tournament with a Chaos Emerald as the prize, in an effort to lure Dr. Eggman out of hiding so he could be captured. By now only eight contestants remain: Knuckles, Rouge, Chris Thorndyke, Emerl, Mr. Tanaka, Mr. Stewart, E-77 Lucky, and Amy Rose.

The episode opens with Knuckles fighting Chris. When questioned about the echidna's persistent dodging, Tails explains that Knuckles is reluctant to fight someone weaker than he is - a fact Chris tries to exploit, expecting that Knuckles will simply let him win rather than engage in combat. However, when the echidna points out that Chris' victory would leave him fighting either Rouge or Amy in the next round, the young master Thorndyke swiftly forfeits.

The next fight, Stuart vs. E-77, likewise ends in a forfeit before it even begins, when a ringside reporter recognises Stuart's true identity as government Director Franklin. The undercover agent flees the stadium.

Round 3 of the quarter-finals sees Emerl swiftly dispatch Tanaka by copying his swordsmanship techniques, while in Round 4 Rouge defeats Amy after knocking her hammer out of the ring.

The semi-finals start with E-77 against Emerl. Eggman's nominatively lucky robot, however, falls over before the fight even starts, and, unable to right itself, Emerl is declared the winner. In Knuckles vs. Rouge, the bat convinces the echidna not to fight a "lady" in public; instead their confrontation is conducted within a large, lightless tent pitched inside the battle arena. The darkness works to Rouge's advantage with her sensitive hearing, and she (apparently) emerges victorious - only to collapse while leaving the field. The tent is winched up to reveal Knuckles still standing inside.

Meanwhile, away from the arena, Sonic is still pursuing Eggman after his attack on the stadium last episode. After Sonic taunts the Doctor into attacking as opposed to running away in the Egg-O-Matic, the hedgehog's spin-attack explodes the machine and sends the fat man flying to the horizon.

The final battle of the tournament, Emerl vs. Knuckles, sees the echidna gain the upper hand at first, but Emerl uses his copied Sonic spin attack to great effect. Rouge comments that Knuckles won't be on top form after the damage she dealt him in their previous fight; indeed, Cream gets so upset at seeing Knuckles suffer that she throws in a white hankerchief to surrender on Emerl's behalf. The fight is over before it lands, however, with the battle robot declared the winner.

However, when the President hands Emerl the red Chaos Emerald during the awards ceremony, the robot absorbs it a' la his behaviour in Sonic Battle, and goes beserk, destroying the stadium. Sonic, Knuckles, Rouge, and Amy attempt to take him down, but they can only barely save Cream and Vanilla when Emerl attacks them. The robot then flies out of the stadium and devastates half the surrounding city in turn. Chuck Thorndyke speculates that there may have been some sort of "unexpected reaction" between the Chaos Emerald and Emerl's Active AI. Eggman, returning in a new Eggpod, surveys the carnage with no small amount of satisfaction, informing Bocoe and Decoe that this is the true face of the ancient combat robot.

Sonic, Knuckles, and Rouge continue to harry Emerl as their fight takes them close to the shore. Cream flies past to save Sonic and Knuckles when they are knocked into the sea; landing, she tries to reason with Emerl, and is even briefly successful, as the robot's eyes revert to their neutral cyan. It's only for a moment, though, before the Chaos Emerald reasserts beserk mode; Emerl lunges at the rabbit, his punch only stopped when Sonic dives in its path.

Knocking out the hedgehog sends Cream and Cheese into their own beserk rampage, dealing a veritable world of hurt to their former friend. Rouge and Knuckles can't figure out why Emerl isn't copying and countering the moves, but Chuck realises it's because Cream and Cheese are using double-team techniques which the robot can't adapt to swiftly enough. As the only one left standing, Rouge is about to go help defeat Emerl, but a half-conscious Sonic tells her that Cream and Cheese should be allowed to finish the job alone. And indeed they do, face-kicking the robot right into the sea - after an obligatory montage of the good times shared by Cream, Emerl, and Vanilla. Finally reverting, Emerl sheds an oily tear as he sinks into oblivion beneath the waves, before exploding in spectacular fashion. After a full sixty-four seconds (in the Japanese version) of nothing but Cream and Cheese weeping, the credits roll.