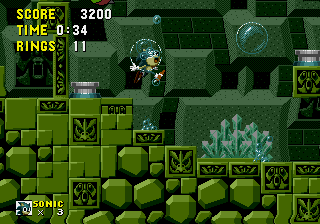 Air bubblesMedia:Sonic1 MD US manual.pdf[1] (気泡 Kihō) are objects that are commonly found within underwater-themed levels in the Sonic the Hedgehog series. These bubbles are filled with oxygen that will refill the player's air supply when inhaled, and are thus necessary for surviving underwater for longer periods of time. Without using air bubbles underwater, the player will eventually drown and lose a life.

Air bubbles are always found in sections of levels that are submerged in water, but not in all underwater sections. Generally, the player will find them periodically bubbling from small clusters that come out of cracks in the ground, but they can be found by other means such as pressing buttons in some of the Game Gear titles, by popping balloons underwater in Carnival Night Zone Act 2, or from water mines while fighting the Laundro Mobile in Sonic Mania. The Tidal Tempest boss in Sonic the Hedgehog CD also utilises air bubbles as a shield which can be inhaled.

Numerous bubbles of all sizes are released from the clusters, but only the biggest of them can be used to restore the player's air. It's not uncommon for a player to have to wait a long time for a large enough air bubble to appear. In some games, a player may be able to find a Water Shield, which allows them to breathe underwater without the need for air bubbles.

If the player goes for a period of time without getting air bubbles, a two-note sound will play every five seconds. After about eighteen seconds (sometimes less in other games such as Sonic Forces), a countdown from five to zero appears on the screen and the infamous countdown jingle will override the music, and if the player doesn't get air before the countdown reaches zero, they will drown. It is believed that the countdown jingle was originally composed by Yukifumi Makino, the sound programmer for Sonic the Hedgehog (16-bit), and it has since then been used in many later games throughout the series.

Some bubbles are larger than the regular air bubbles, and these are so large that they'll surround the player's character. While inside these bubbles, the player cannot drown and will slowly rise to the surface. They can move left and right with

, adjust their speed with

, and press any of the jump buttons if they need to break out, though colliding with walls, ceilings or hazards will also pop the bubble.

Air bubbles appeared as board spaces that can be found on the Emerald Coast board in Sonic Shuffle. When a player enters the sea, a five-turn timer will be placed on them. By passing over an air bubble space, the timer will be reset to five turns, but if they don't reach one or reach the surface before the timer reaches zero, they will drown and wash up on the surface, wasting a turn.

Prefect Charyb's section in the final area of Sonic Chronicles: The Dark Brotherhood, Nocturne, features air bubbles that will appear once the section is flooded with water. While moving around the submerged lair, the player's party will gradually lose POW Points (PP), and once a character's PP reaches zero, that character's HP will then deplete until it reaches one. The player can refill their PP using the air bubbles.