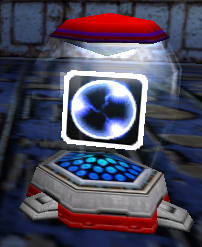 An Item Box containing a Magnetic Shield in Sonic Adventure 2.

This Shield is similar in concept and function to the Lightning Shield in that in addition to serving as a one-shot barrier against damage and life loss, it can draw in Rings like a magnet, though differs in that it lacks the Lightning Shield's other traits such as the Double Jump and immunity to electricity.

In Sonic Adventure 2, its names and function are the same as in Sonic Adventure. In addition to Item Boxes, the player may also obtain a Magnetic Shield when they pass a Point Marker when they have at least 90 Rings and either kind of Shield already equipped. However, the Magnetic Shield may become a nuisance to the player in sections where they will need to use the Light Dash due to its ability to draw in Rings.

The Magnetic Shield appears in Sonic Riders and Sonic Riders: Zero Gravity as the Magnetic BarrierMedia:SonicRiders GC US manual.pdf[16]Media:SRZG Wii UK manual.pdf[17] in Western versions, and the Jiryoku Barrier (磁力バリアMedia:Sonic Riders GC JP Manual.pdf[18]) in Japanese versions. It is obtained randomly from Item Boxes and has the same function, however unlike other games, it will disappear on its own after a short while.

Whereas the console and PC versions of Sonic Generations feature the Thunder Shield, the Nintendo 3DS version instead features the Magnetic ShieldMedia:SonicGenerations 3DS UK manual.pdf[19] with the same appearance and function as its other appearances. There is only one Magnetic Shield monitor in the entire game, which is found in Emerald Coast Act 1, though the Magnetic Shield can also be obtained as a random bonus item by playing Versus Mode online once a day.