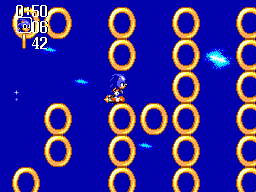 Sonic using the Rocket Shoes in the Special Stage.

The Rocket ShoesMedia:SonicChaos GG US manual.pdf[1] (ロケットシューズ)Media:Sonic Chaos Game Gear JP Manual.pdf[2] are a Monitor power-up that appeared in Sonic Chaos and later Sonic the Hedgehog Triple Trouble. Available only to Sonic the Hedgehog, these jet-powered sneakers allow the hedgehog to fly through the sky at high speeds for a few seconds.

As soon as Sonic breaks open a monitor containing the shoes, they will be strapped on to his feet, and he will begin flying immediately. To control the Rocket Shoes, the player uses the D-Pad to gain or lose altitude or to change direction. However, because Sonic is flying at a high speed, controlling the shoes can be tough as upward rising and descent can be rather quick or turning in the opposite direction can be strenuous. If the player bumps into a hazard, the shoes are immediately lost. Tails cannot use the Rocket Shoes, so they are replaced with something else.

In their first appearance in Sonic Chaos, Sonic can find the Rocket Shoes inside monitors found in Turquoise Hill Zone, Gigalopolis Zone, Sleeping Egg Zone and Mecha Green Hill Zone. Because of the short nature of Sonic Chaos' levels, it is possible for Sonic to fly over the entirety of an Act with the Rocket Shoes. When playing as Tails, all Rocket Shoes monitors are replaced with Super Ring monitors.

The first Special Stage consists of Sonic flying through the sky with a special pair of Rocket Shoes that never expires to reach the Chaos Emerald at the end before time runs out, collecting rings and bigger rings worth 10 along the way.

The Rocket Shoes make a second appearance in Sonic the Hedgehog Triple Trouble where they are again found in monitors for Sonic in Great Turquoise Zone and Sunset Park Zone. This time, the player can press

while flying to make Sonic perform a mid-air flip attack. Tails instead gets his own power-up, Hyper Heli-Tails, which makes him fly in a similar manner to Sonic's Rocket Shoes.

Later on in Atomic Destroyer Zone Act 3, Sonic gets a Rocket Shoes monitor at the start and flies through the Zone, only to be ambushed by Metal Sonic, initiating the first of many final boss fights.