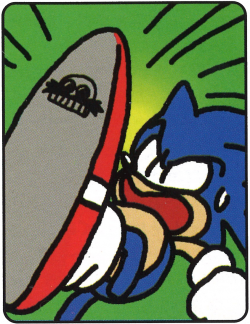 The Speed Down Boots as depicted in the Japanese manual for Sonic Labyrinth.Media:SonicLabyrinth GG JP manual.pdf[1]

The Speed Down Boots (スピードダウンブーツ)Media:SonicLabyrinth GG JP manual.pdf[2], full name being the Dr. Eggman Tokusei Speed Down Boots (Dr.エッグマン特製・スピードダウンブーツ)Media:SonicLabyrinth GG JP manual.pdf[2], are a pair of shoes that serve as the main plot device of Sonic Labyrinth. They were invented by Dr. Eggman for the purpose of slowing down Sonic the Hedgehog.

The boots are designed to look like Sonic's red and white sneakers as closely as possible, with the only difference being the presence of Eggman's visage on the soles of the shoes to signify that they are the creation of Eggman.

The meaning behind the boots' creation comes from the revelation Eggman had that, if Sonic's speed was taken away from him, then he would not be able to interfere with his plans for world domination. As such, he creates the shoes, and secretly switches them with Sonic's real sneakers while he was sleeping. Upon wearing the boots, Sonic notices he can no longer run, leaving him at a severe disadvantage. The boots are infused with the power of the Chaos Emeralds, therefore preventing Sonic from taking them offMedia:SonicLabyrinth GG JP manual.pdf[2], and the only way to deactivate this power is to use the Chaos Emeralds themselves, which Eggman has stolen and placed inside his Super Labyrinth.Media:SonicLabyrinth GG US manual.pdf[3]

Although the boots prevent Sonic from running fast, they do not take away his ability to curl into a ball and perform the Spin Dash. By relying on this ability, Sonic is able to spin through the labyrinth, reclaim the Chaos Emeralds, and finally take off the boots, regaining his trademark speed.