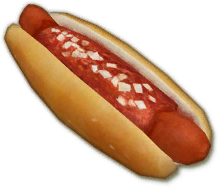 A chili dog as it appears in Sonic Unleashed.

A chili dog is an object that appears throughout the Sonic the Hedgehog series. As the name suggests, it's a jumbo frankfurter served in a bun and slathered with a meat sauce with chopped onions and jalapeños. It is best known as the favorite food of Sonic the Hedgehog.

The concept of chili dogs being Sonic's favorite food was initially established in western media, as they were served as prominent food products all over Mobius in the Archie Comics and various cartoon series produced by DiC Entertainment such as Adventures of Sonic the Hedgehog. Sonic (and sometimes other characters such as Tails) would eat almost nothing else but chili dogs, even as snacks and main meals.

Chili dogs also appear in the Sonic Boom TV series where they are eaten by many characters, Sonic included.

Chili dogs would much later be integrated into the main series canon starting with Sonic Unleashed, where it is available as a food item that can be purchased for 50 Rings, and its in-game description states that it is Sonic's favorite food. When fed to Sonic, he gains 30 EXP, and if fed to Chip, he will comment on how it's too spicy for his personal tastes despite deeming them good. Every shop in the game sells chili dogs with the exception of the Eggshop in Eggmanland, which sells a black chili dog called the "Egg Dog" which neither Chip nor Sonic find appetizing. Sonic can also earn special chili dogs by completing Don Fachio's missions that give him extra EXP.

In Sonic and the Black Knight, Sonic was having chili dogs when he was summoned to the Grand Kingdom by Merlina the Wizard. Catching his two chili dogs after falling into Merlina's world, Sonic eats one of them before defeating the surrounding Knights of the Underworld while throwing his last chili dog around. When Merlina teleported them away from King Arthur though, Sonic's last chili dog gets blown away, much to his disappointment. It also appears as one of the collectibles in the game.