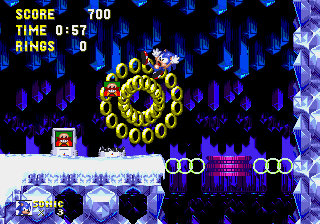 Bearing Dr. Eggman's grinning face, this item will cause damage to the player, resulting in the loss of a Shield, Rings or a life. It won't have any effect if the player is invincible or in a Super state, however.

Though the item does not actually appear in this game, its icon exists within the monitor graphics and the item itself can be hacked into the game, though nothing will happen if the player breaks it. The 2013 remake allows the player to place one using Edit mode, functioning like it did in later games.

In the item's first official appearance in the series, it is referred to as the Eggman Mark (エッグマンマーク) in the Japanese manualMedia:Sonic2 MD JP manual.pdf[2], but was never given an English name. In gameplay, this item only appears in the 2P VS mode as one of the many items obtained at random from a "?" Monitor, harming the unlucky player who receives it.

Sonic the Hedgehog 3 makes the item available in the main game, addressing it as Robotnik in International manualsMedia:Sonic3 MD US manual.pdf[4]Media:Sonic3 MD EU manual.pdf[5]. In this game and its continuation, Sonic & Knuckles, the Robotnik monitors are rare, but are placed in inconsistent places. The first monitor that can be found in the games is in a corner on top of a bed of spikes in an underwater section of Hydrocity Zone Act 2. The next two monitors in the game can be found encased in ice blocks in a cavern in IceCap Zone Act 2, just before the player leaves the cavern by trampolines. Launch Base Zone Act 2 features three more Robotniks: two set together at the foot of a tunnel, and one next to a Super Ring monitor after exiting a water pipe; these three monitors only appear in Sonic 3 alone, as they are replaced with two Super Rings and an Invincibility when playing Sonic the Hedgehog 3 & Knuckles.

In the Sonic & Knuckles Zones, a Robotnik can be found right next to a Super Ring concealing a spring in Mushroom Hill Zone Act 1. The next two are found in Lava Reef Zone, where they are located shortly after the start of Act 2. The last monitor in the game can be found in Death Egg Zone Act 2, where it is placed near a gravity button and right next to a Super Ring monitor.

In its only appearance in an 8-bit game, the item is referred to as simply Eggman (エッグマン) in the Japanese manualMedia:SonicBlast GG JP manual.pdf[6]. However, it acts much differently than it usually does in its 16-bit appearances, as the player gets nothing when its monitor is broken.

After not appearing in a game for 21 years, the item makes a return as the Eggman Mark in the English versionMedia:SM PC DIGITAL MANUAL UK V10 LR.pdf[1], and the Eggman Trap (エッグマントラップ) in the Japanese versionMedia:SonicMania consoles JP manual.pdf[3]. It functions just like it did in the 16-bit titles and can be found in sporadic locations throughout Mania Mode and Encore Mode.