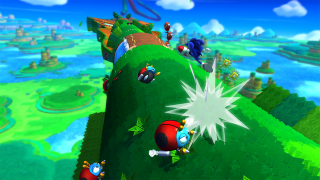 The Kick is a move performed by Sonic the Hedgehog in Sonic Lost World, and serves as another method to attack enemies. Its name and functionality differ across the Wii U/PC version and the Nintendo 3DS version.

In the Wii U/PC version, the move is known as the Flying Kick, and the move is executed similarly to a Homing Attack. When an enemy is locked-on, the player must jump and then press

. This will make Sonic zero in on the enemy, then kick them away, knocking them into other enemies. If multiple enemies are locked-on, then Sonic will kick the nearest enemy. This move is required to take out certain types of Badniks such as Antons and Crabmeats. The move can also be used on certain projectiles to reflect them back, such as shelled bombs dropped by a golden Ball Hog or Zor's missiles in the Silent Forest Zone 2 fight.

In the Nintendo 3DS version, the move is known as the Somersault Kick, and functions differently from the Wii U/PC version's Flying Kick. By jumping and pressing

, Sonic will kick out with his leg, firing a thin blue shockwave in its wake that can hit Badniks from a distance. When there is an enemy that cannot be defeated with a simple Homing Attack, this move can be used to stun said enemy, allowing Sonic to follow up with a Homing Attack or a Spin Dash. This move can only stun enemies, and cannot destroy them.

Kicks have no effect on stronger enemies such as giant Caterkillers, or on bosses (with the exception of Zavok when he is guarding during the Sky Road Zone 4 boss fight in the Wii U/PC version).