Back to: Sonic Heroes.

A short interview with then-lead of Sonic Team, Yuji Naka. Topics such as the possibility of a Sonic/Mario crossover (finally realized in Mario & Sonic at the Olympic Games) are also discussed. A one-page preview covering many of the same aspects in the other previews. 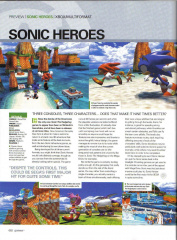 A one and a half page article previewing Sonic Heroes and its potential to Sega. Also includes short pieces on the rumors of Sega's impending merger, and Sega's McDonald's promotion. 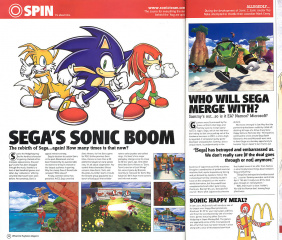