Ocean Palace is the second level of Sonic Heroes. Off the coast of Seaside Hill, these spiralling alabaster ruins stretch across the waves. Massive stone doors bar your path, and must be taken out with a punch. Watch out for the ancient collapsing pillars, and have fun on the large loop-de-loops. Don't forget to run when the boulders chase you down! And keep an eye out for the pod of giant, stone carrying turtles! The hero teams push further into the old city to eventually confront "Dr. Eggman" in the Egg Hawk. 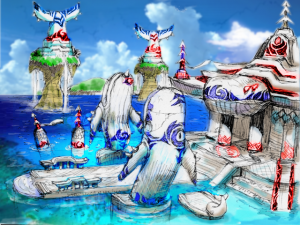 A direct continuation from Seaside Hill, the teams now fight through Eggman's robots in Ocean Palace. Team Sonic is determined to smash the mechs and in turn their creator. E-123 Omega of Team Dark shares a similar sentiment, determined to eliminate his former master's creations. These teams' levels end with a chase sequence where they must escape from some demonic-looking wheel-boulders that have fallen off the statues. A road in the ruins is then the battlefield for the Egg Hawk boss battle.

In Team Rose's story, Amy senses Sonic in her heart, and keeps hot on his trail. The Chaotix Detective Agency, meanwhile has been tasked by their inscrutible client to rescue a Chao from the palace. This odd mission (combined with the presence of Chao in Cryptic Castle much later) has led to speculation that Eggman may actually have a soft spot for the little creatures - or, failing that, at least a detached scientific interest.