The Death Egg Robot, referred to as the Mega Death Egg Robot in the OST[1], is the seventh and final boss in Sonic Forces. This is a three-phase boss battle that is fought with all three non-DLC characters, though it is listed on the World Map as a Classic Sonic stage. Despite its name, it has no connection with the Death Egg or other mechs bearing the name.

After destroying the power source for the Phantom Ruby in Final Judgement, it seemed that the Resistance had won, but it turned out to be a decoy set up by Dr. Eggman, and the original Phantom Ruby has been incorporated into his trump card. With the Eggman Army on the rise thanks to the Ruby, it is up to Sonic, his Classic self and the Avatar to stop him once and for all.

The first phase of the boss has the player control Classic Sonic and is entirely from a 2.5D perspective. The player will be standing on a floating cluster of purple blocks, and one by one, the leftmost blocks will disappear, reappearing on the right. This process will eventually reverse, with the rightmost blocks disappearing and replacing themselves on the left side, so the player must be on their toes and move quickly to stay safe.

The Death Egg Robot will loom over the player from behind the platform and will use two kinds of attacks. The first attack is a laser that sweeps across the surface, clearing away the topmost layer. This is simple enough to jump over, but as the fight goes on there can be as many as two or three lasers. The Death Egg Robot's second attack is to hurl solid rocks at Classic Sonic just like the battle against the Egg Dragoon. Unlike the aforementioned boss, these rocks will not stay sitting on the platform, but will clear away parts of it, so the player will have to jump as they are in the air to knock them back. When a rock hits the Death Egg Robot, it will rebound back so the player can hit it again for more damage.

It takes a total of six hits from solid rocks to drain the health bar and move on to the next phase. 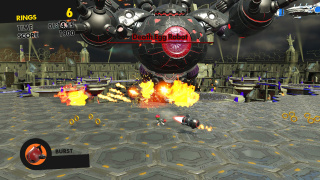 The second phase sees the player take control of the Avatar in a free-roaming third-person perspective, and the way this phase is set up is similar to the battle against the Zavok replica much earlier in the game. At first, the Death Egg Robot only has two attacks, the first of which is slamming its right main arm upon the platform, creating a series of red shockwaves that must be jumped over. The second attack is a barrage of missiles fired from the robot's fingers which are relatively easy to avoid, especially if the player is using a long-ranged Wispon. The boss will also summon Egg Pawns to get in the player's way.

The player has three options to damage the boss: they can wait for the boss to strike the floor with its right arm and either use their Wispon or a Wire Attack on the core, which does more damage but is dangerous to pull of. The second option is to attack its right arm directly as it slams down, which deals low damage, but is much safer. An Indigo Wisp is also provided if the player is using an Asteroid Wispon, though Lightning or Burst are effective in this fight. A Wispon should deal damage equal to one third of the Death Egg Robot's health bar. . In the latter half of the fight, the Death Egg Robot will start destroying pieces of the arena by punching it with its left fist and firing lasers from its eye. These attacks will reduce how much space the player has to fight, and could potentially result in death if they do not move quickly enough. Destroyed sections of the arena will regenerate after a while. 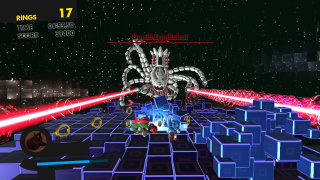 For the third and final phase, a white three-headed mech with eight tentacles will burst out of the core of the Death Egg Robot and suck both Sonics and the Avatar into a Null Space-like dimension. This mech is similar to the Nega-Wisp Armor from Sonic Colours, and all three characters go up against it together.

To attack this mech, the player must dash through piles of blue cubes to collect Rings and White Wisps to fill the Boost Gauge and use the Boost to get within range, then use Modern Sonic's Homing Attack to hit the main head seven times. Immediately after that, they must once again use the Homing Attack to hit all three heads on the mech, resulting in a successful hit point against the boss. Modern Sonic strikes the central head, followed by Classic Sonic jumping on the left head, and the Avatar using a Wire Attack on the right head.

The mech has three kinds of attacks to use against the player: the first attack is a series of red lasers fired from its tentacles that the player simply has to jump over, lest they take damage. After taking two hits of damage, the mech will start firing streams of crimson flames that are also easy to dodge, but they can be tricky as the streams can sometimes weave across each other in the shape of an "X", making them hard to predict. After dealing even more damage, the mech will start shooting its clawed hand from one of its tentacles at the player. After that it will fire 2 quick lasers.