Back to: Sonic Mania. 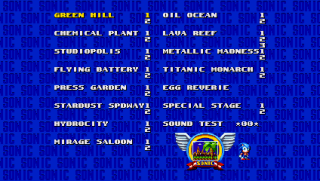 To access the level select, go to the Mania Mode Save Select menu and highlight "No Save", activate Debug Mode in Game Options (providing it is unlocked), then select "No Save" and press and hold

(XB1) / Q (PC) before the screen goes black. Note that even as of v1.04 the player still needs to highlight a "No Save" game for it to work.

To use the level select:

In v1.0 of the Nintendo Switch version, the level select could also be accessed from the title screen by holding

before "Press Any Button" appears, then pressing any other button after it appears. According to The Taxman, this method of accessing the level select was intended for testing and was left in by mistake; it was later removed as it affected logging in to user accounts on consoles.[1][2]

As of the v1.04/Sonic Mania Plus update, new cheat codes have been added which can be entered in the sound test on the level select screen, discovered by CodenameGamma:

Play sounds 04, 01, 02, 06 (referencing the same code found in Sonic 2). This gives the player all of the Chaos Emeralds, enabling Super transformation. 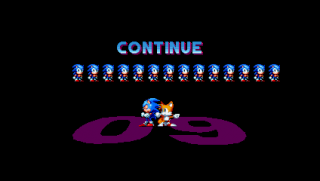 Play sounds 02, 00, 01, 08, 00, 06, 02, 03 (a reference to Sonic's 27th birthday; a video to celebrate him was uploaded on that same day). This sets the game to Encore Mode, allowing the player to play Encore Mode stages (except Angel Island Zone) and use Debug Mode in Encore Mode. If the player tries to enter Egg Reverie Zone after activating this code, they will be sent to the first Special Stage in Mania Mode instead. 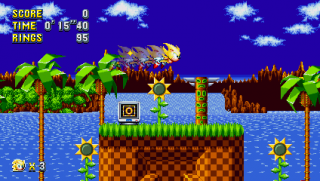 Play sounds 02, 00, 01, 07, 00, 08, 01, 05 (referencing the release date of Sonic Mania). This allows every character in their Super form to fly in any Zone like Super Sonic normally would in Egg Reverie Zone. The player can even perform a dash in the air, which will cost 5 Rings.

Play sounds 09, 00, 00, 01. This gives Sonic access to the Insta-Shield, Drop Dash and Super Peel-Out at the same time. This code will even allow the player to use the extra moves in Encore Mode if the Encore Mode code above is enabled.

Play sounds 06, 02, 01, 04 (All Chaos Emeralds code backwards). One thing interesting is that this code works outside of No Save mode. 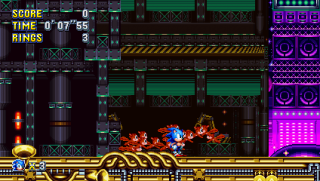 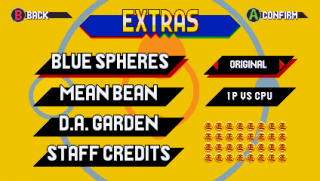 First, while on the title screen, input the Sonic the Hedgehog 3 level select code (

) in the time between Sonic appearing and the "press any button" text appearing. After that, go into level select and put in the Ricky Mania code. Once that is done, play sounds 01, 09, 08, 09, 00, 05, 00, 01 (referencing Hunter Bridges' birthday) and you will obtain all 32 Gold Medallions. This cheat actually saves the medallions, which is ideal if the player just wants to unlock all of the Extras without having to play the Blue Spheres Bonus Stages.

Play a sound from 00-1F and then select Special Stage 2. This is similar to the above cheat.

In Hydrocity Zone, grab one of the hooks, then press:

. a Ring chime will confirm correct entry. Afterwards, find one of the boosters and activate it. Instead of the normal sound, it will play a @vgdunkey-related sound effect.[3] 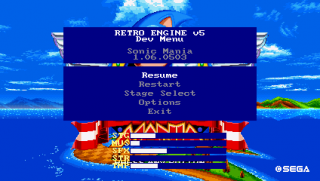 In the PC version of the game, if the Settings.ini file is edited with the line 'devMenu=1' within the '[Game]' section, then a dev menu can be accessed by pressing the  Esc  key in-game.[4] This menu was used by the dev team to quickly access various sections of the game, and includes:

Enabling the Dev Menu will also activate extra features that are accessed with certain keys. The player can hold  Backspace  to fast-forward the game, press  F12  to freeze/unfreeze the game, and  F11  while the game is stopped with  F12  to advance one frame at a time. Note that this will prevent Steam's screenshot function from working if the key for it is bound to  F12 .

Additionally, the player will be able to press the "Super" button during a Special Stage to instantly increase speed level by one and raise the Mach Bonus. This can be done infinitely, and no additional cheats are required.

There are four unused Blue Spheres layouts in the game that cannot be accessed via the Dev Menu. The only way to access these is to rename their SpecialBS files.

"Thanks for Playing" screen 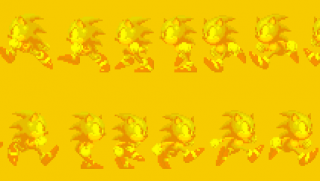 The "Thanks for Playing" screen that was originally used in public demos at events can be accessed using the Dev Menu. However, some of the assets will not be loaded, so the player is only presented with the background that was used before being taken back to the Sega screen.

A mode called "Vape Mode" (short for Vaporwave Mode) was found in the code of the game and CAN be accessed in the level select, but the code to unlock it is unknown. In fact, there may not even be one at all.

An early Green Hill level design, similar to what was presented in the San Diego Comic Con demo, is located in the GHZCutscene folder in the file Scene1.bin. This is used for when the Phantom Ruby teleports the player to Green Hill Zone in the intro, with the actual level being loaded afterwards.