Windy Valley is an Action Stage in Sonic Adventure. It continues the Sonic gameplay tradition with the windy fans that blow the characters around and across large distances. This stage is broken into three parts with lively music and outrageous heights that would easily give anyone other than Sonic and his pals vertigo.

Sonic and Tails begin their search for the Chaos Emeralds in this level, eventually finding the blue Chaos Emerald. E-102 γ comes here after the Egg Carrier crashes to destroy E-103 δ. 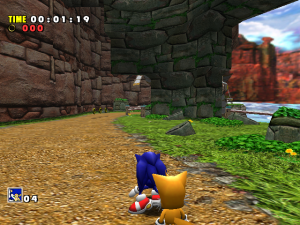 The first part of Sonic's stage and the only area for E-102. Sonic follows a short series of wind paths and platforms before eventually being swallowed by a giant Tornado. E-102's stage starts further back then Sonic's, with the boss being in place of the tornado. 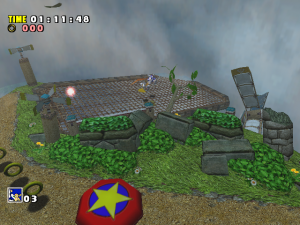 A brief section set inside the giant tornado. The only way forward is to ascend using pieces of land the tornado has sucked up. This is the second area to feature jump panels. 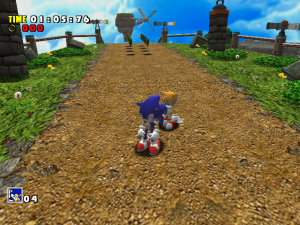 The third section for Sonic and the only one for Tails. Once Sonic gets shot out the top of the tornado, he will be making his way along pieces of the ground that are falling through the sky. The Rhinotank in this section is affected by a bug that causes it to fall through the floor upon spawning.

The Air is an arrangement of the music from Green Grove Zone in the Sega Mega Drive version of Sonic 3D: Flickies' Island.