Twinkle Park is a theme park located in Station Square that's been taken over by Dr. Eggman's robot minions, serving as an Action Stage in Sonic Adventure. It features some great visuals and heart pounding music to keep the player moving along. There are three areas to Twinkle Park.

Story-wise, Amy Rose wanders into this level after hearing of a promotional event where cute couples can enter the park for free, with Sonic chasing after her before ZERO does, while Big the Cat enters to search for Froggy after searching through the sewer. 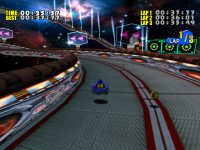 This is where Sonic starts the level. Nobody else goes through this particular section of it, although an altered version of it (in the Twinkle Circuit area) can be unlocked for every character. Sonic savvy players would also recognize this portion's music as a remix of the first act of Panic Puppet Zone from Sonic 3D Blast.

The strategy for this part is simple; you start out in a short hallway that leads to a round bumper car arena, with monkey robots driving the bumper cars. To drive a bumper car, simply destroy the monkey robot driving the car and then jump in. The acceleration (and thus overall speed) of the vehicle depends on how many rings you have; more rings roughly translates a faster bumper car.

Shortly after you hop into one of the bumper cars, a large door opens in the arena opposite the hallway you started in. Going through the door leads you to a short track, with enemy robots that can be destroyed by ramming them with enough speed at the right angles. Also littered on the track are rings, item boxes, ramps, and speed boosters. 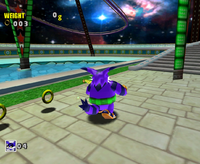 This section is available to Sonic, Big & Amy. This is the main portion of the theme park with giant rides surrounding the main Pleasure Castle in the center of the stage. Amy will start here and have to press five buttons to open the Castle door. Big will be able to fish here in the nearby pool. Sonic's version of Twinkle Park stage ends with this section.

As Sonic the area includes a roller coaster ride, a carousel, and two bowling segments. During the latter, Sonic is spun toward a set of pins; knocking them at the right speed and angle (such as to get a strike) produces a ring bonus at the end. 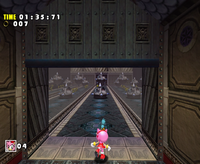 This section is only accessible by Amy. Amy enters Pleasure Castle's interior. Mirrors everywhere make it difficult to judge the correct timing for jumps, and trap floors and spikes don't make getting through the level any easier. In each mirror room, Amy is chased by Zero.