For the Wii version of the stage, see Sweet Mountain (Wii).

Sweet Mountain is the second Area in the Nintendo DS version of Sonic Colours. As with every other Area in the game, Sweet Mountain features two full Acts, three missions and a boss fight. It becomes available to play alongside Starlight Carnival after clearing Tropical Resort, and either can be completed first.

This Area introduces the Red Wisp, allowing Sonic to use Red Burst.

After Globotron is defeated in Tropical Resort, both Sweet Mountain and Starlight Carnival open up for Sonic, Tails, and Yacker. On traveling to the former, they run into their first Red Wisp, which lets Sonic use the power of fire. Further exploration into the Mission stages brings the friends across - to everyone's surprise - Blaze the Cat! Tails' inquiries as to how she turned up at the Park, rather than the Sol dimension, indicate that one of her Sol Emeralds simply started glowing, and bam!, here Blaze is.

Blaze isn't the only misplaced space time character to be found in Sweet Mountain. The second mission sees Sonic and Tails run into Silver the Hedgehog, muttering disapprovingly of an "Experience the future!" ride which he claims is grossly inaccurate. The third mission starts with Blaze and Silver teaming up in a partnership not seen since Sonic the Hedgehog (2006) - although it only lasts long enough for them to scare Orbot and Cubot away.

If this Area is played after Starlight Carnival, Sonic will reach Dr. Eggman, who whips out a mind-control cannon and hypnotizes Tails. As is often the case with Eggman's machines, though, it doesn't quite work as intended, running out of juice after mere seconds. Not to let a mishap like that stop him from ruining everyone else's day, the fat man sets his boss robot, Captain Jelly, on the heroes. 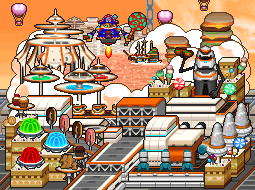 The map screen for Sweet Mountain.

A cross between a planet-sized bakery and a military-industrial complex, this tethered planetoid makes up part of Dr. Eggman's Amazing Interstellar Amusement Park. It is made of sugary baked goods such as cake, donuts, and pancakes, as well as other snacks like hamburgers. One of the stage's landmarks are the rockets full of jellybeans that can be seen in the background. In this DS version, Sonic can use smaller versions of these rockets to reach higher areas, but in the Wii version, the rockets appear as obstacles instead. Whisk-wielding and laser-toting Egg Pawns also make their appearance here.

The stage was one of the two first levels of Sonic Colours to be revealed, the other being Tropical Resort.

A short optional tutorial teaches the player how to use the Red Burst Color Power.

Sweet Mountain Act 1 introduces the Red Wisp. Several interactive rides and stage-specific objects, including popcorn cannons, jellybean rockets, and gelatin make their appearance here. The popcorn cannons can be activated by entering them in Red Burst form, while the rockets can be used as vehicles and steered up or down, though they will explode if they collide with the terrain three times. Stomping on the gelatin will cause Sonic to bounce higher. The final stretch of the Act includes a short obstacle course for the player to ride through on a jellybean rocket. Near the end of the obstacle course lies a Red Star Ring, followed by a series of gelatin plates.

Sweet Mountain Act 2 is similar to Act 1, but introduces hot air balloons that will float upward when entered in Red Burst form. The Violet Wisp, which isn't unlocked until Asteroid Coaster, also appears in this Act. Near the end of the Act is a robot that tosses Sonic into the air and into a short free falling section where a Red Ring can be found.

Defeat 20 enemies. This mission challenges players to make use of the Red Burst's explosive ability.

Time trial. Reach the goal before time runs out. Clock bubbles will increase the player's time by five seconds.