For the Wii version of the stage, see Asteroid Coaster (Wii).

Asteroid Coaster is the sixth Area in the Nintendo DS version of Sonic Colours. As with every other Area in the game, Asteroid Coaster features two full Acts, three missions and a boss fight. It becomes available to play after clearing both Planet Wisp and Aquarium Park.

This Area introduces the Violet Wisp, allowing Sonic to use Violet Void.

Asteroid Coaster, in addition to being luminous green and generally unpleasant, is the place where Dr. Eggman hides his Nega-Wisp Factory - the machine which harvests Wisps' Hyper-Go-On Energy, and transforms the multicoloured aliens into crazed Nega-Wisps. Upon entering this place, Sonic and Tails encounters one of the types of Nega-Wisp, the Violet Wisp, whose feral language cannot be deciphered by the Miles Electric. While racing towards the chain generator, Sonic runs into E-123 Omega, who seeks to destroy Orbot and Cubot, though Sonic convinces him that they aren't worth the effort. Mission 2 sees Sonic and Tails stumble across Shadow the Hedgehog, who "sees no reason" to help the pair against Eggman, but challenges his rival to a mission in order to ensure he hasn't gone "soft".

After rescuing the bumbling henchmen and completing Shadow's challenge, it turns out that he and Omega are searching for clues on a "secret ride". Upon further investigation, they discover Eggman's control room and uncover his plans for Project "Mother". Meanwhile, Tails hasn't seen Yacker in a while and begins to worry. After shutting down the plant, the Wisps are freed and Sonic and Tails head back to Tropical Resort to celebrate. 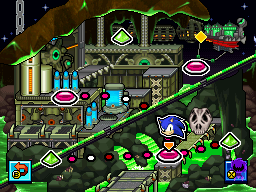 The map screen for Asteroid Coaster.

With Sonic and Tails coming closer to the final confrontation with Eggman, this level brings the fat man's twin loves of pollution and fatal danger to the Amazing Interstellar Amusement Park. A toxic planetoid brimming with deadly green ooze, Asteroid Coaster introduces the ghostly Violet Wisp to vacuum up enemies with Violet Void, as well as the Cyan Wisp to ricochet off walls with Cyan Laser.

While instantly-fatal green goo is the level's most obvious feature, Eggman has also installed a sideline in giant vents and turbines, which serve to direct Sonic's path through the skies in Violet Void form. Wall Jumps and Skid Attacks are necessary features of Sonic's repertoire, in order to sneak through small gaps or up vertical routes. On occasion, a mistimed Skid Attack can spell rapid doom for the hedgehog, as pursit from giant snapping T-Rex skulls can only be evaded by deft maneuvering. Falling rocks and trips on the level's eponymous roller-coasters are also repeating features.

A short optional tutorial teaches the player how to use the Violet Void Color Power.

Asteroid Coaster Act 1 introduces the Violet Wisp. Spikes are scattered across the Act, presenting a challenge for Sonic when wall jumping or platforming. In the latter part of the Act, asteroids will begin to fall from the sky rapidly, and will get in Sonic's way unless he is continually Boosting. The toxic pools here can kill Sonic in one hit.

Act 2 features more roller coaster action than Act 1. Toxic pools are more present and hazardous, and Sonic must avoid being crushed by dinosaur heads while riding the roller coaster, which can be done by jumping between the roller coaster cars. The Violet Wisp also gets more usage in this Act, as it is required to pass some toxic pools.