For the Wii version of the stage, see Aquarium Park (Wii).

Aquarium Park is the fifth Area in the Nintendo DS version of Sonic Colours. As with every other Area in the game, Planet Wisp features two full Acts, three missions and a boss fight. It becomes available to play alongside Planet Wisp after clearing both Sweet Mountain and Starlight Carnival, and either can be completed first.

This Area introduces the Cyan Wisp, allowing Sonic to use Cyan Laser.

On arrival to this aquatic area, Yacker introduces Sonic and Tails to the Cyan Wisp; Sonic takes an instant liking to it, as "he's almost as fast as I am!".

Further exploration of the Mission areas leads Sonic and Tails to Big the Cat, who's up in the park searching for Froggy. Amy Rose has also found her way into orbit somehow, although after coercing Sonic through a mission, she gets dizzy from the excitement of seeing him again, giving the blue blur chance to slip away and leave Tails to deal with her. After completing the third mission, Amy demands that they celebrate with a romantic packed lunch in the aquarium, although Big is much more receptive to the prospect than Sonic. Tails is the only one to point out that the middle of Eggman's orbital fortress is not an opportune place for fine dining. 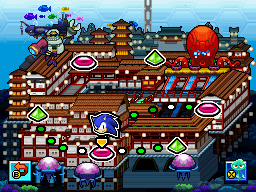 The map screen for Aquarium Park.

As the name implies, this Area is a massive water park, which sports a dual oriental theme. One of the component attraction-worlds of Dr. Eggman's Amazing Interstellar Amusement Park, the area hosts samurai-themed Egg Pawns, along with several Orbinauts that usually indicate extra routes that Cyan Wisps can be used for. Much undersea adventuring sees Sonic hunting for those same air bubbles he's been pursuing since Labyrinth Zone.

In addition to the standard submarine fare, Aquarium Park also features a host of new gimmicks. Giant bouncy jellyfish break up Sonic's stride as he aquaplanes across the water's surface; coral walls stand in the way, impervious to everything but the Boost; and pinwheeling shoals of fish carry the hedgehog along and throw him surface-wards. The Yellow Wisp allows Sonic to drill-swim through the water, while the Cyan Wisp sends him refracting all over the place as a laser beam.

A short optional tutorial teaches the player how to use the Cyan Laser Color Power.

Aquarium Park Act 1 introduces larger underwater areas, jellyfish that Sonic can bounce on (much akin to the gelatin in Sweet Mountain), fish that will carry him in circular motions, and water slides. The player has an option of taking the top route using the Cyan Laser Color Power or taking the underwater route and making use of the Yellow Drill Color Power introduced in Planet Wisp. Using the boost and air boosting when necessary will allow Sonic to run along the surface of the water.

Aquarium Park Act 2 shares many similarities with Act 1, but a larger portion of the Act is underwater. At the end of the Act is an overhead water slide sequence in which the player must dodge mines and collect the Rings placed upon three parallel water slides that diverge at certain points.

Time trial. Reach the goal before time runs out. Clock bubbles will increase the player's time by five seconds. This mission takes place in Act 2.

Collect 200 Rings before time runs out. This mission takes place in a new area where the only platforms are a series of floating jellyfish. The Cyan Laser must be aimed carefully in order to clear this mission.