This page is about South Island as a storyline location. See South Island (Sonic the Fighters) for the stage named after it. 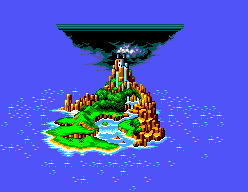 A map of South Island in Sonic the Hedgehog (8-bit).

In Sonic the Hedgehog, Sonic finds that the evil Dr. Eggman built a base on the island and turned the local residents into robots to aid in his search for the legendary Chaos Emeralds. The heroic hedgehog collects the Emeralds first, stops Eggman and chases him off the island.

Close-up of the island's industrialised summit.

The story in the 8-bit Sonic the Hedgehog is the same as in the 16-bit one, and the games most likely depict the same adventure.

In Sonic the Hedgehog 2, Eggman returns and kidnaps all the inhabitants, along with Miles "Tails" Prower, demanding a ransom of six Chaos Emeralds to return them. Sonic goes out to stop him once again, and succeeds.

In Sonic Chaos, Eggman steals one of the Chaos Emeralds on South Island and as a result, the rest of the Emeralds become unbalanced and cause the island to slowly sink into the ocean.Media:Sonic Chaos Game Gear JP Manual.pdf[2]Media:SonicChaos GG US manual.pdf[3] However, Sonic recovers all the Emeralds and saves the island.

In Sonic the Fighters, South Island is one of the battle arenas. It is the very first arena in story mode, and is where the player character faces Knuckles the Echidna. The arena is set on a small island plateau, in an area that looks mostly like the Green Hill Zone.

In Sonic Adventure 2 and its GameCube remake, Sonic Adventure 2: Battle, Green Hill Zone was a secret stage that could be unlocked by obtaining all 180 Emblems. On the Stage Select screen, the icon for Green Hill could be found on a secluded island, presumably South Island.

In Sonic Mania, Sonic, Tails and Knuckles are teleported to the Green Hill Zone due to a reaction from the Phantom Ruby.

A few levels in Sonic Forces involve Sonic and/or the Avatar running through a completely trashed Green Hill Zone, which was turned into a pseudo-desert due to Eggman taking over a very large chunk of the world.