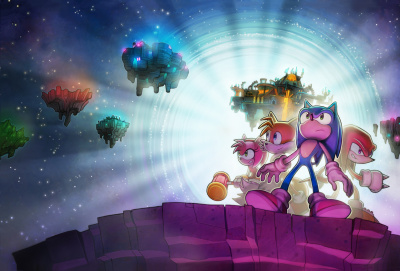 The Twilight Cage is a mysterious prison dimension inhabited by the Nocturnus Clan echidnas (amongst others). Chapters 7 through 10 of Sonic Chronicles: The Dark Brotherhood take place inside the Twilight Cage.

The Twilight Cage appears very much like the inside of a space nebula: spiralling, indigo gas against a backdrop of distant starlights. The only solid ground in the Cage comes in the form of planetary fragmants torn from other worlds, including the Nocturnus Clan's city-fortress, the Nocturne.

The Cage has been (unwillingly) inhabited by many races during its history. The first inhabitants of which any records remain are the "Precursors", who shared the dimension with a variety of un-named species. When Sonic and his friends arrive in the Cyclone during Sonic Chronicles, the eldest race resident is the Kron. Alongside them are the Zoah, the N'rrgal, the Voxai, and the Nocturnus Clan echidnas.

As of Sonic Chronicles: The Dark Brotherhood, the exact nature and purpose of the Twilight Cage remains shrouded in mystery. Sonic helps Nestor the Wise decipher some clues by gathering Precursor tablets during their travels; according to Nestor's translation, the Precursors believed the Cage to be a prison for dangerous and powerful races, designed by a godlike being called Argus. The validity of this hypothesis has yet to be determined.

Time flows at a different pace inside the Twilight Cage. A day inside might translate to mere seconds in some 'normal' dimensions; while for others, years might pass on the outside. It is the latter arrangement which holds sway between the Cage and Sonic's world; when Sonic and friends leave at the end of The Dark Brotherhood, they discover Eggman has had enough time during their absence to rebuild Metropolis.

The Nocturnus Tribe divide the Cage into two parts: Sector Scylla, containing the Zoah and N'rrgal colonies, and Sector Charybdis (or Charyb), containing the Voxai colonies Alpha and Beta. The Kron Colony and the Nocturne itself are not in either sector. 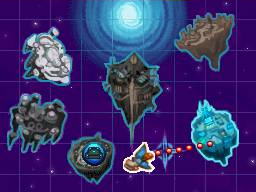 The map of the Twilight Cage to the right shows (clockwise from top):