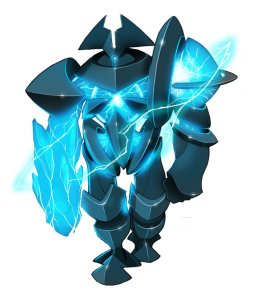 The Zoah are a race of militaristic aliens first encountered by Sonic and friends during Chapter 8 of Sonic Chronicles: The Dark Brotherhood, after the N'rrgal Queen locks the Cyclone's controls to take them to the Zoah Colony.

Perhaps the most technological of the species resident in the Twilight Cage, the Zoah are strange beings apparently constructed of steel and lightning. These electric giants tower over the anthropomorphic animals by a good few meters, and can be resilient opponents in combat. Zoah society is said to be highly stratified, with the military caste presiding over a civilian class, who in turn enjoy privileges denied to non-citizens. True to their fighty nature, the Zoah award citizen status through Trial by Combat!

Interacting with other races in the Twilight Cage mostly by trying to conquer them, the Zoah reserve particular genocidal hatred for the N'rrgal, those slime-like beings with whom they share Sector Scylla. After the Argus Event which brought the Nocturnus echidnas into the Twilight Cage, Imperator Ix secured the allegience of the Zoah by defeating their leader, General Raxos, in single combat. The General is not entirely satisfied with this forced alliance, but is honour-bound to uphold it until Sonic also defeats him one-on-one. Thus freed of their obligations, the Zoah agree to join with the other races to take on the echidnas, and in Chapter 10 their fleet distracts the Nocturne's defensive cannons so the Cyclone can sneak past the forcefield defenses.