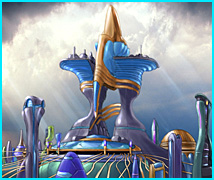 Monopole is the setting for Sonic Riders: Zero Gravity. While the region goes un-named in the English-language manuals, Japanese media describes Monopole as "the famous city of the future", referring to Megalo Station and Nightside Rush, as well as potentially the rest of the game map (depending on translation).

Monopole is an extremly high-tech region, with hover-cars, robotic workers, and superstructures like the towering Megalo Station or the domed ecospheres of Botanical Kingdom. Rather than an Eggman Empire machine dystopia, Monopole seems to be a technological future done right (or at least better); Megalo is a bustling and prosperous metropolis, while the chrome canals of Aquatic Capital make it look like a shining new Venice. Monopole may or may not be a part of the United Federation; in the opening sequence, GUN (referred to as "the international security organisation") is said to be investigating the robot disturbances, but its presence is never actually observed.

The region's reliance on robotic technology is exploited by Dr. Eggman during Zero Gravity. Hiding behind the disguise of the shell company Meteor Tech, the scientist saturates Monopole's industrial economy with his own SCR-GP model robots - intending to later seize control from Crimson Tower once his machines have thoroughly infiltrated society. Eggman is beaten to the punch, however, when the Arks of the Cosmos hijack his Mother Computer and start a robotic rampage for their own purposes.