(Redirected from The Dark Brotherhood)

Because of the 128MB cartridge's space limits and the use of Mobiclip for the opening and comic book stylized cutscenes, cutscenes do not feature extensive voice recording; basically only character grunts were used in the game.

All playable characters are put in classes that determine their unique abilities. These classes are Power (ex: Sonic), Shifter (ex: Amy), and Support (ex: Tails). 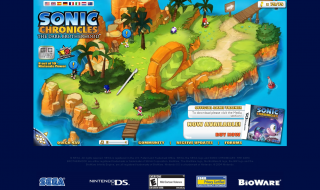 The Sonic Chronicles page on the Sega Europe and America websites featured a minigame in which the player controlled Sonic with the mouse, collecting Rings in order to gain access to downloadable media. The game consisted of two areas: Green Hill Zone and Voxai Colony Beta, which contained a total of 75 Rings (some hidden behind scenery). Collecting a certain number of Rings would reward the player with two wallpapers, and a set of icons for collecting all the Rings.