Aquatic Ruin Zone is the third Zone of Sonic the Hedgehog 2, and is the token underwater level of the game.

In the Simon Wai prototype, this was actually the first level.

As its name would suggest, Aquatic Ruin is a vast lake contained within a thick forest and populated with the ruins of an ancient civilization. Some of the pillars have a tendency of breaking when the player passes underneath them, potentially crushing them, and some of them will sink into the water. Some pillars are buried into the ground, and will spring up once the player approaches them, though these pillars can be destroyed by jumping on top of them; however, in Knuckles in Sonic 2, Knuckles will have a tougher time getting past these pillars due to his low jump height. There are also arrow launchers built into the pillars that will shoot arrows at the player should they pass them.

The structure of this Zone in the top paths are rather cramped, as many paths are bumpy and intertwined, with some paths taking the player to lower and higher places. There are even paths that go right through the tall loops in the Zone, and there can be as many as three different paths above the water in one place. Hollowed logs serve as bridges throughout the Zone, and swinging platforms will take the player across gaps, though one swinging platform will break off and drift on the surface of the water should the player stay on it.

The underwater areas take the player through the submerged bushes of the Zone and can stretch out for most of the level design for both Acts, so it is important for the player to keep their air supply topped up as much as possible using the air bubbles should they happen to fall down to this route. Despite being a water level, it is entirely possible for the player to avoid the water entirely in both Acts by sticking to the top-most routes as much as possible. The boss at the end of the zone is Hammer Eggman. 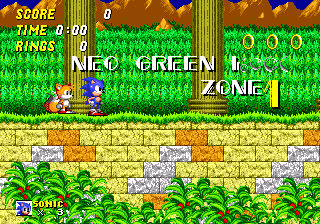 Aquatic Ruin's original name as seen in the "pre-beta".

Aquatic Ruin, up to some point in development, was named Neo Green Hill Zone which can be seen in various prototypes of Sonic 2, particularly on the level select screen from the Simon Wai prototype up to Beta 6, and in the title card “Neo Green Hill Zone” in the Sep. 14th pre-beta, although the word "HILL" glitches and displays bubble sprites after the Zone finishes loading. The name was eventually reused for the first Zone in Sonic Advance.

In the Sonic the Comic series, Aquatic Ruin Zone was originally a colony created by the Drakon Empire long ago that eventually became the submerged ruins it is in the present day. Sonic would arrive at the ruins to investigate strange readings picked up by the Kintobor Computer and defeat a swarm of Whisps, only to end up falling into the lake and getting stuck under some rubble. He was then saved by a Sentinel, who at first Sonic thought was a minion of Dr. Robotnik. However, the Sentinel crumbled and sank into the lake after realising there is no longer any living civilisation in the city he was built to protect.

Tails would later come to this Zone to destroy the Spider-Moth.