For the prototype level in the Simon Wai prototype of Sonic 2, see Aquatic Ruin Zone.

Neo Green Hill Zone is the first level in Sonic Advance. Set in a beach-like area with palm trees and checkered soil very much like normal Green Hill Zone, the Zone fills the Tropical island theme for the game.

The Zone opens with a beach area littered with umbrellas and deckchairs, which then leads to a long slope down to a very fast road filled with Speed Boosters in Act 1. Distinguishing features in Act 2 include a geyser of water that pushes characters forward, a pathway with a thick forest canopy, as well as an iron bridge at the end of Act 2 (for the boss fight) which leads into Secret Base Zone.

Unlike other levels in the game, this Zone has no bottomless pits. There is a bug in Act 1 where, if the player runs down the long slope while playing as Knuckles or Amy, they can go off-screen and straight through a solid wall. The Special Spring for this level is located at the end of Act 1. The player will either need for Sonic or Amy to use the speed boost at the end to reach a platform going up and down, or for Tails to fly up there. The player can also reach it with Knuckles by gliding a little before the ledge where the spring is at. There is an arrow of Rings hinting at the location of the spring.

The name for this Zone may be a reference to the Simon Wai prototype of Sonic the Hedgehog 2. The prototype has a level named Neo Green Hill Zone, which is actually an early name for Aquatic Ruin Zone.

Differences between prototype and final 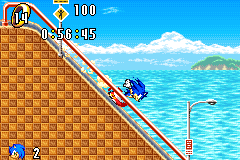 During the development of Sonic Advance, many screenshots featuring the HUD shown on the right emerged. These are all very strange compared to the final; the alignment of the ring count and timer are lower than they should be, and the lives counter (complete with wrong palette) is further right than it is in the final. The ring used in the prototype screenshots is a bit thicker and the font used in the HUD was slightly altered to be slightly taller and to utilize inward shadowing. For Neo Green Hill Zone specifically, the clouds and water are in a different formation than the final in this shot. The sign and lightpost are not in the final game either.