Difference between revisions of "Silent Forest"

Silent Forest (サイレントフォレスト) is the fifth world in Sonic Lost World. The stage varies from a forest theme to a more haunted her style.

In the first zone, as its name implies, the subject is a huge and varied forest. It carries with him a great resemblance to Mushroom Hill Zone, including in it a new gimmick mushroom and badniks phase cited as Mushmeanies, Cluckers and Madmoles. The stage is a part of rails, in which Sonic must in addition to deflect mine carts, Sonic has to be careful with surprise crocodiles.

Like all areas Sonic Lost World, Silent Forest also has a stage with different theme. So in this area the stage changes to a more haunted tone, but can be seen in the background the forest, the music also changes to a tango style. The worst danger of the stage is a giant robotic owl noted Sonic will cause instant death. At the end of the stage the player fights with Zor riding on the owl.

Zone 3 is set in a frozen cave, like seen in Windy Hill, but even the floor is frozen itself, doing tricks and jumps become more difficult. The area also feature stalactites and stalagmites that fall when Sonic approaches. This area also has as enemies, Cluckers and Bombs.

The fourth zone is set in ancient ruins, the rooms are dark and only observe the Sonic silhouette, enemies and landscape. While the stage is so Sonic can not use Homing Attack, has light switches by stage, if lit, they leave the stage clear for a few seconds. Sonic faces the end of this zone, Zor.

Zone 1 is a large maze full of flowers cannons and teleportation switches, there are two areas at this stage that it should go before reaching the capsule. In the early stage, there are 3 cannons flowers, they send for their areas to reach them, you need to jump on the cannons that threw him to the area. After finishing each area the player is released for the start of the stage to go to another and so end all the central cannon opens and throws the player into the final section where the capsule.

The second zone of Silent Forest is an area mostly rails with few land between them. Most of it is to jump between the rails without falling or being hit by badniks and parts of land, you need only defeat badniks enough to progress in the stage. Near the end of the stage has electric rails that can only be used with the use of Wisp ivory, electric shield, Super Sonic or invincibility.

It is very similar to Act 2 version of the Wii U, but the robotic owl does not automatically kill Sonic discovers, there is only one normal damage. 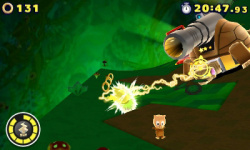 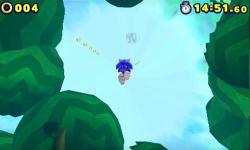 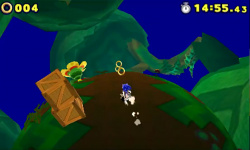 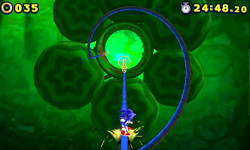 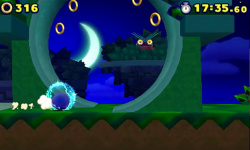