Back to: Sonic the Hedgehog (TV series).

The following details the development of Sonic the Hedgehog.

A Resistance is Born/A Hero's Reward

The characters are based on the animals rescued by Sonic in the first game.

The characters Sally, Bunnie, and Rotor have similarities to Princess Acorn, Johnny Lightfoot, and Joe Sushi as in they are based on the same animals.

Robotniks design is different from any of the cartoons. He has black fingernails, a white mustache, and a green tongue.

This conveyor belt roboticizer is totally different from the final version, which was a glass capsule.

One character is shown which doesn't have a corresponding animal in the games, a wolf. It's not clear if it was to be a supporting character or just a random character thrown in the picture. The wolf concept was used for the character Antoine in the SatAM.

A prototype opening sequence was created for the show, using the art style and character designs seen in the pilot episode, Heads or Tails. This opening was shown at the Summer Consumer Electronics Show 1993, however only a partial recording of the sequence exists online. A short snippet from the end of the opening was also featured on the ABC Saturday Morning Preview Special, the evening before the show's television debut.

A storyboard of this opening was featured in the bonus section of the Sonic the Hedgehog: The Complete Series DVD set released by Shout! Factory in 2007. A few cels have been found by the fan community, matching the storyboard. 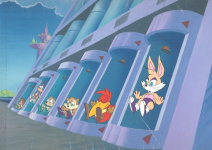 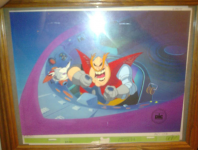