Battles are fought in 3D arenas with up to 4 players. Each character has a set of attacks and abilities. The majority of attacks are performed with the

button is used to jump, and the

button lets the player block attacks, or replenish health if the button is held.

The playable characters also have unique special moves, the three types being Shot, Power, and Set. Shot moves are projectiles which can damage an opponent from a distance. Power moves can deal damage quickly in a single move. Trap moves generally involve using a type of bomb to surprise-attack the enemy. However, only a limited number of special moves can be selected. Shot, Power, and Trap must be allocated to three slots: Ground, Air, and Defend. The special move the player sets to Ground will be used when they press

on the ground. The move set to Air will be used when the player presses

in mid-air. The last slot, Defend, has a different function; When the player sets a certain type of special move to Defend, then every time an enemy uses the same type of special to attack the player, they'll automatically block it.

Each player has a health bar and an "Ichikoro Gauge". When health is completely depleted, the player is KO'd and loses one life (in a survival match) or the one who KO'd them gets a point (in a KO match). The Ground, Air, and Defend settings are chosen at the beginning of the match, and every time the player respawns. As a player takes damage, blocks attacks, or heals, the Ichikoro Gauge fills up. When it is full, the next special move the player does will instantly KO anyone it hits. However, if they chose to defend against that type of special, or successfully block, their Ichikoro Gauge will be filled instantly. Players healing damage will also slowly fill up their Ichikoro Gauge, but are still vulnerable to attacks. 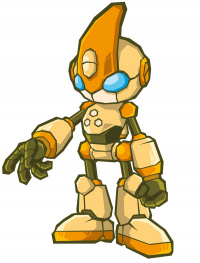 Emerl, the Gizoid, forms the basis for Sonic Battle's story.

The main gimmick of the game is called the Skill Capture system. Emerl can imitate the actions and attacks of every other character. He starts out with slow, incomplete captures of Sonic's abilities, which serve as the default moves. As the game is played, the abilities of other characters are recorded as Skill Cards. After each fight, certain skills are captured this way, one card per character per fight (so if Emerl fought Tails, he would get a Tails data card, and if he fought Sonic, he would get a Sonic data card.) The capturable actions consist of not only the attacks and special moves each character performs, but their individual abilities in running, jumping, mid-air actions, and the like. These can be allocated to their corresponding slots in Emerl's ability list, and doing so gives Emerl the new moves to use in battle. (Note: What the charaters do ingame does not determine what the Skill Card will be.) Sometimes you will get a rare skill such as one of the skills on the third page of Emerl's skill-edit list (ex: fight pose, color 1, attack support). There are 309 skill cards to collect in all, though the rarest can't be acquired by fighting combatants in normal battles. Emerl's ultimate battle cards can only be earned through Tails' virtual training in the final chapter of Story Mode. Secret character-centric abilities can only be obtained via passwords.

Since Emerl is powered by the Chaos Emeralds, there are cutscenes in the Story Mode episodes in which the Emeralds are used to enhance Emerl's abilities. Each Emerald raises the skill point maximum by 10, a rather large amount considering that most of the time, individual battles raise it by 1-5 (depending on performance). The player can choose to replay a Story Mode episode after it's been completed, but the Skill Card/Point data is still saved. Oddly enough, the skill point maximum is raised at the Chaos Emerald cutscene every time the player reaches them. This means the same Story Mode episode can be repeated to raise Emerl's skill points faster than normal.

In addition to the principal Story Mode with overworld exploration and battle arena fights, there are a number of other game modes available in Sonic Battle for single or multiplayer (by connecting the Game Boy Advance with up to 3 others via a link cable). These include "Battle", "Challenge", and "Training" modes, where one can specify the specific characters, opponents, and arenas to spar in, as well as a selection of 2D mini games largely unrelated to the fighting motif. These include:

Combo Cards representing each character can be obtained by entering a code in the Sonic Team building in the Central City area during Emerl's story.

Note: Shadow's card code is an anagram of Maria. Knuckles' code is a reference to Takashi Yuda, his designer, and his first game Sonic the Hedgehog 3. Chaos' code is almost an anagram of Tikal, but with an "E" instead of an "L"

After completing Story Mode, replaying any episode and clearing them again will present the player with a part of Professor Gerald Robotnik's journal. The transcripts are available here.

NOTE: This game's Sound Test does not feature corresponding titles.