Difference between revisions of "Sonic the Hedgehog 3"

Sonic the Hedgehog 3 (ソニック・ザ・ヘッジホッグ３) is the Sonic series' third outing on the Sega Mega Drive/Genesis. The game is closely tied to its direct sequel Sonic & Knuckles, as the two games were originally one until time constraints and cartridge costs forced the game to be split into two interlocking parts. This allowed Sega to save costs as the size of the full game may have been more as the game would require large amount of memory due to its size. This also allowed Sega to have a new Sonic game on the market much earlier. Official artwork for Sonic 3 clearly show this game was meant as the first part. In addition to two separate cartridges, Sega had planned on releasing a combined version of them called Sonic the Hedgehog 3 Limited Edition but it was canceled altogether. Sonic 3 in its final form was heavily advertised, as fitted one of Sega's biggest hitters of the year.

The plot of the game is the most complex of the Genesis/Mega Drive games Sonic was featured in. The Death Egg crashes on an ancient island kept afloat in space by the Master Emerald. The force lowers the island into the sea. Dr. Robotnik begins repairs, and convinces the guardian of the Master Emerald, Knuckles the Echidna, that he is with Knuckles in protecting the island and that Sonic the Hedgehog and Miles Prower will try to steal it. Halfway through the game Robotnik attempts to launch the Death Egg again after repairing it, but Sonic causes it to crash again.

Sonic 3 was released on February 2nd, a date referred to in Sega promotional material as "Hedgehog Day" in a nod to its actual status as Groundhog Day.

The levels were three times larger than previous games and contained multiple paths for different characters (using each characters particular abilities would allow them to access or restrict them from taking certain paths. Also, there were more environmental elements with which to interact and more end-of-level bosses without any of the framerate issues that plagued certain parts of Sonic 2.

The game introduced many staples to the series, such as an increasingly story-driven game, and multiple shield types. There were also inter-connecting stages within each zone (the next act would continue from the same place the previous act ended). This wasn't the first Sonic game to do this as the 8-bit version of Sonic 1 did something similar.

Sonic and Tails are now equipped with special moves that are activated by pressing the jump button a second time while in mid air. Tails will fly if he’s out of water, or swim if he’s in water, both for a limited amount of time. In a team game, a second player can use Tails to "airlift" Sonic for a short amount of time. If Sonic has no shield equipped, he will generate an Insta-shield by tapping any controller button twice, giving him a split second burst of protection from projectiles and increase Sonic's attack range. Tails retains his ability to fly regardless of whether or not he has a shield.

As in Sonic 2 the player could choose to play as either Sonic or Tails, or as a team, controlling Sonic, with the AI or a second player controlling Tails. The objective of the game was to progress level to level defeating the mid-boss and boss of each level and collect all seven Chaos Emeralds. The Chaos Emeralds were obtainable from special stages which, as in Sonic 1, were entered through giant rings. In order to see the game's real ending, seven Chaos Emeralds must also be collected from the special stages.

At the title screen, selecting a two-player game (select Competition) prompts you to a screen where you have three choices to make. Press up or down to select one of three different modes of 2-player play: Grand Prix, Match Race and Time Attack (you can also select Exit, which will take you back to the title screen). Pressing left or right at this initial screen will allow you to select between having power-ups in the two-player zones and not having power-ups. Once you select your mode of play each player must select their character. Player 1 uses controller 1 and Player 2 uses controller 2. Press left or right to cycle between the choices of Sonic, Tails or Knuckles and start to make a selection. Tails can fly like in the regular game by double jumping, but Sonic cannot use the W Kaiten. Otherwise 2-player play is exactly the same as 1-player play. Knuckles is a playable character and plays exactly the same as Sonic (he cannot glide or climb walls like he can in Sonic & Knuckles). 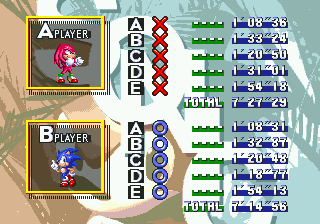 Grand Prix is a race through all five 2-player zones in order, and once each player selects their character, you immediately go to the first zone, Azure Lake Zone. Match Race is also a race between both characters but in only one zone you must select after choosing your characters. Time Attack is a 1-player way of playing the two player zones - only one player can play, you select your character and zone, and try to complete it as fast as possible. The three fastest times ever are recorded in the screen that follows completing the zone. You can do this to practice for Grand Prix or Match Race, or just to fool around.

The 2-player zones are very simple and short compared to 1-players zones. They repeat themselves over the X axis as you run to the right, and the first player to complete five laps around the whole zone wins. The zones are played in a split screen like in Sonic 2's 2-player mode; Player 1 plays in the top half of the screen and Player 2 in the lower half. The two characters' positions in the zone are independent of one another and neither character can directly block or impede the other. If you are playing Time Attack or if, for some reason, you are playing Grand Prix or Match Race with only one controller attached, there will be no character in the lower screen. The goal in each 2-player zone is simply to go five laps through the zone as fast as you can. Each time you run past the pole at the start, you complete a lap. First player to complete five laps wins the zone. The number in the top right corner indicates what lap you're on. Running left across will actually make this number decrease, and thus is totally unproductive.

At the beginning of every 2-player zone (including in Time Attack) there is a 3, 2, 1 countdown. If either player passes the start pole before the word 'GO!' appears, the word 'FAULT' appears and the countdown restarts. You can go through an infinite number of false starts this way. Also, at some point in every 2-player zone there are power-ups (if they are enabled). The power-ups are nothing like those in 1-player mode - they are spheres that rotate in the air, two at a time, and they change each lap. Touch them to collect them. Only one player can collect each power-up. Some of them are ones not found in the regular game. If a player dies at any time they simply return to the beginning of the lap they were in (but in a close race, this costs precious time). The 2-play zones have no rings (except a ring power-up) or enemies.

Hitting bumpers: 10 points for each of the first ten hits on any given bumper; after that no more points can be gained from that bumper

Hitting enemies: (a chain refers to all enemies destroyed until the next time Sonic lands on some form of ground or jumps)

Ring bonus at end of level: 100 points for each ring held

Signpost: At the end of each Act 1, a signpost falls from the air; jump at it before it hits the ground to keep it in the air and score 100 points. You can get as many 100-point bonuses as you're able to keep the sign in the air for. If the signpost lands on a predefined spot it will spawn an item box. Each level has a different arrangement and different selections of power-ups available.

Time bonus at end of level:

Special stage: 100 points for each ring held. If you collect all rings, you also get a 50,000-point Perfect Bonus (even if you don't get the Emerald).

Sonic 3 had the option, unseen so far in the Sonic the Hedgehog series, to record the game level where a player had been on an FRAM (similar in operation to SRAM, but does not require power source to hold information) and resume it at a later date - which increased the replay value tremendously as several levels sport secret passages and, although not vital to the ending of the game, allow the collection of 7 Chaos Emeralds at a later date.

A closer inspection of the ROM by fans provides some details on the marketing scheme pulled by Sega with the release of Sonic & Knuckles. While Sega originally stated that the new "revolutionary" lock-on technology literally transformed the secondary game (i.e. Sonic 3 or Sonic the Hedgehog 2), the analysis of the ROM reveals that Sonic 3 was produced with full knowledge and possibly having most of Sonic & Knuckles already completed, as it provides a whole second version of the game, not an "add-on".

Sonic's body on the title screen

Even though it's normally cut in half, for a few frames it's possible to see Sonic's complete body on the title screen. The same applies to Sonic the Hedgehog 3 & Knuckles.

The adaption featured Knuckles for the first time in a comic book. One thing different about this comic is that Dr. Robotnik mentions his plans to recharge his hovercraft, not the Death Egg. It was published in August 1994.

For Sonic 3's launch in the UK, Sega hired Right Said Fred to make a promotional single for the game. The resulting track was Wonderman.

Here is a list of the music featured in Sonic the Hedgehog 3, as it is located in the sound test, which can be accessed by entering the zone select code.

See Sonic the Hedgehog 3 OSV for a download page.