Difference between revisions of "Shadow the Hedgehog (game)"

Shadow the Hedgehog is a game starring Shadow the Hedgehog, an antihero of the Sonic the Hedgehog series. It was revealed at Sonic's inauguration into Walk of Game. Over 50 years ago, deep in a Military Research Space Station, Prof. Gerald Robotnik forged an experiment known as "Project Shadow" while trying to unlock the secrets of the Chaos Emeralds at the request of the Government. The experiment cumulated in "The Ultimate Life-Form"; Shadow the Hedgehog, a bio-mechanical creature with the ability to harness the mysterious power of the Chaos Emeralds in ways not thought possible. After being thought dead in Sonic Adventure 2, Shadow has returned - with amnesia. He does not understand who he is or where he's from, but he's determined to find out, be it from Black Doom, the leader of an alien race who claims he and Shadow made a pact involving the Chaos Emeralds, or from Dr. Eggman, who seemed to be experimenting on Shadow for an unknown purpose in Sonic Heroes. Or will Shadow learn his secrets from the very military organization that he swore revenge against, the G.U.N.? One thing is for sure: Everybody wants the Chaos Emeralds, and if Shadow hopes to convince any of them to talk, he's going to have to get them first.

Shadow must get from the start of the level to the end, as has traditionally been the case for the Sonic titles. The biggest change, however, would be his ability to use several weapons; he was shown using an MP5 submachine gun, a sword and a bazooka, among many others. The weapons can, naturally, harm opponents, but they also have the ability to break down large pieces of the level, such as tall columns. The use of weapons is optional, although there will be some levels that require their use. Shadow can still use all his moves from the previous games like the Homing Attack and Spindash. This game unique gimmick in that the player's decisions determine Shadow's future. Shadow has 3 missions in almost every level (these being Hero, Dark, and Neutral), and he can choose one to accomplish at any point in the level. The level Shadow goes to changes depending on which mission was played on the previous level. Also, Shadow now has at least two Chaos ablities, Chaos Control (light blue) and Chaos Blast (red), and gains these by killing certain targets Killing aliens and clearing debris from the game field increases the Chaos Control Gauge, and killing humans and destroying nature (trees, plants, etc.) increases the Chaos Blast Gauge.

Due to the mildly violent nature of the game, the ESRB rating was, for a time, in question. The official ESRB website originally had the game rated as T, along with GameSpot, but the official site listed E-10+. The T rating was seemingly further evidenced, however, by the fact that, at trade shows where Sega showed off the game, they asked only those 13 and older to play the title. Early builds of the game even had mild swearing in them. And the game does include two swear words. Before the game was released, Sega took out the human's blood, changed the color of alien blood from red to green, and censored the scene when a GUN soldier shoots Maria, cutting out as Maria is shot and falls to the ground. Regardless, the ESRB website later updated the rating to E-10+, thus making it unanimous. The CERO rating is "All Ages"; the OFLC classification is PG; the PEGI rating is 12+. Some have commented that the E-10+ rating is inconsistent, seeing as it is more violent and vulgar than Super Smash Bros. Melee which was rated T at a time when the E-10+ rating didn't exist.

The gaming community had strong opinions on the preview 'Shadow' videos posted on popular Internet gaming sites (such as GameSpot or IGN.com).

Many comments were made about the gun Shadow wielded. Some argue that it goes entirely against the spirit and/or gameplay mechanic of the Sonic series or that Shadow should be powerful enough that a gun would not be necessary, given that he has proclaimed himself to be the "Ultimate Life Form" in Sonic Adventure 2. Others note his technological background in defense of the weapon, from his inception to the air shoes he wears and the weapons that Eggman and Tails used in Sonic Adventure 2.

Another topic of discussion is Shadow getting a game over Sonic; after Sonic Heroes, many fans had been hoping for a new Sonic game that would take the direction that game was heading and lead it toward a more retro feel, closer to that of the original Sega Genesis games. When it was revealed that that was not the direction the new title was heading, some people were disappointed.

A rebuttal to some of the criticisms was that it was a sidestory game, and not starring Sonic himself; therefore, as it coudn't be considered a true Sonic game (much like Knuckles' Chaotix), it should be given some freedom to attempt new things without hampering the main series. Another rebuttal was that it was an early preview, and that it could have ended up significantly changed by the game's ultimate release. 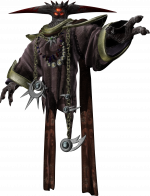 Besides wielding weapons, Shadow can use vehicles: 4x4's, motorbikes, G.U.N. mechs, and alien crafts. As with the weapons, this spawned complaints from fans, who point out that Shadow is similar to Sonic, and thus would probably be able to run faster than most vehicles. Using the vehicles is not necessary to complete the game.

As suggested by Sega's official site for the game, though Shadow can run faster than the game's vehicles, the vehicles have many capabilities that Shadow does not have (e.g., the trailer from a pre-rendered movie from the game which sees Shadow use a motorcycle as a rolling missile, and using the vehicle to run over enemies or hit them). As in most Sonic games, the Chaos Emeralds play a big part in this game, as Shadow needs them to regain his memory and to use his ultimate Powers.

These powers, according to the developers, are the ultimate in destruction and speed. The two Chaos Powers are the heroic "Chaos Control" (lets Shadow manipulate time and space), which is used by defeating Black Arms invaders, and the evil "Chaos Blast" (creates an explosive blast of energy damaging enemies), which can be used by killing GUN soldiers and robots. Chaos Spear (a move used in Sonic Adventure 2) is only available with Super Shadow. Instead of having a linear storyline, the game has multiple path options, which is touted as the game's major selling point; the path options are also dynamic, allowing the player to change Shadow's alignment. There are a total of 10 alternate endings that can be unlocked, plus one "Final" ending which ties everything together. Although you play as Shadow, all major Sonic characters appear at points in the story, and new characters are also expected. Also, the developers of the game have done away with the old graphics engine (used since Sonic Adventure for Dreamcast) and created a new one, capable of better graphics, new special effects, and more destructive environments.

Due to the mildly violent nature of the game, the ESRB rating was, for a time, in question. The official ESRB website originally had the game rated as T, along with GameSpot, but the official site listed E-10+. The T rating was seemingly further evidenced, however, by the fact that, at trade shows where Sega showed off the game, they asked only those 13 and older to play the title. Early builds of the game even had mild swearing in them, and the game does include two mildly offensive words (damn and hell). For the English Version of the game, Sega took out the human's blood, changed the color of alien blood from red to green, edited the word 'piss' and put 'tick' instead (Sonic says this), and censored the scene when a GUN soldier shoots Maria, cutting out as Maria is shot and falls to the ground. Regardless, the ESRB website later updated the rating to E-10+, thus making it unanimous.

Recently, an album has been released entitled Lost and Found: Shadow the Hedgehog Vocal Trax. Several music tracks from the game are featured in this album, while some mixes were made to others. There is also a promotional song in Japan : a remix of m-flo's "TRIPOD BABY" track off of BEAT SPACE NINE, their latest album.

Since it was the game in which Shadow was introduced, many of the songs featured in Sonic Adventure 2 were remixed for Shadow the Hedgehog.

In this game, a track was removed for due to copyright and licensing reasons. The song was "Who I Am" by Magna-Fi, the band who made "All Hail Shadow". Another called "Broken" by Sins of a Divine Mother was removed due to licensing reasons. [1] Instead A2 (which features members from the latter band) tracked the song "Chosen One" in its place.