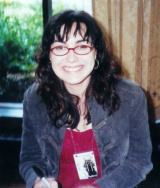 Lisa Ortiz is an American theatre and voice actress, best known for her roles in English anime adaptations. She is perhaps best known for the roles of the high-elf Deedlit in Record of Lodoss War, Lina Inverse in Slayers, and Tony-Tony Chopper in One Piece. Her extensive resumé also includes the role of Amy Rose in Sonic X and the newer Sonic the Hedgehog games (post-Sonic Heroes), and Shizuka Kawai in Yu-Gi-Oh!, she was later replaced by Cindy Robinson in 2010.

Bilingual in English and Spanish, Ortiz is most recognized for her dialect voices. She holds a BFA in theatre from Hofstra University.

Ortiz credits her entry into voice acting to one of her brothers, who stole her car. During the search for it, she was accompanied by an animator for anime distributor Central Park Media, who let slip that the company was looking for voice actors. Ortiz went in and auditioned, and landed the role of Deedlit in Lodoss.