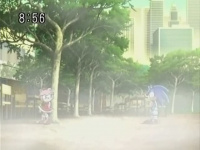 That's What Friends Are For, known as Eiyuu Sonic o Oe! (英雄ソニックを追え!) in Japan, is the 14th episode of first season of Sonic X, and features a new ending theme: "The Shining Road" performed by Aya Hiroshige.